All US, UK, and Irish residents who read The Reference Frame have a chance to win a Toyota Highlander as long as they will hide that they read this blog.

What do you have to do? Before September 12th (twelve more days to go), you must submit a 15-second, 30-second, or 60-second videoclip showing how normal activities cause climate change: a "very short video message that will drive your friends, community or government to get involved in solving the climate crisis." See the rules at the

The contest was also discussed at CNBC.

The judges will be Cameron Diaz and her 19 colleagues and later the public. What kind of videos have a chance? Al Gore who sponsors the event has answered this question in the New York Times:


He cited as an example of an effective spot a 45-second ad known as “Black Balloons” that illustrates how normal household tasks like brewing coffee or watching television contribute to global warming because they are powered by the burning of fossil fuels. The spot culminates with a thick cloud of black balloons representing carbon dioxide emissions swirling into the sky.


But Al Gore's disciples do learn something. Their brains are full of these black balloons.

Nevertheless, the rules are clear: create a clip how drinking coffee, watching TV, or opening a bottle of Coke causes global warming and an SUV is yours! A good idea might be to replace black balloons by sleazy snakes or something like that. You can check that this whole story is real and not a parody. I've spent quite some time trying to find a catch showing that this whole thing is just a prank. It's not. Save your time. 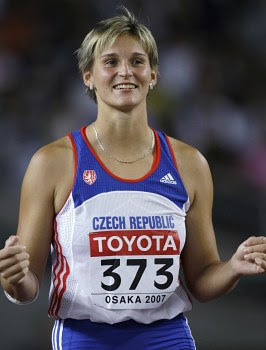 Barbora Špotáková of Czechia just became the world champion in javelin. Why is it in this article? Look at the T-shirt.

It reminds me of the joke about a young couple that didn't have money to buy diapers for their baby. So instead, they bought a house in the suburbs of New York and cleaned the buttocks with the grass on their new garden. ;-)

Incidentally, I forgot to tell you why it's completely OK from a moral viewpoint to earn (and drive) an SUV for an ad against coffee that contributes to global warming: the SUV is a hybrid which means that one-half of the black balloons are created in the power plant! :-)

I am serious. Someone should create a good, extraordinarily powerful ecospot of this kind, submit it so that one can't find that the creator is a skeptic, and when he or she wins the SUV, it may be announced that the ecospot was a hoax. John Howard is already working on his new SUV. ;-)