Between 1997 and 2002 or so, I didn't play too many state-of-the-art computer games. That was not the only reason why I was completely stunned by the Mafia game back in 2002. According to various journals such as PC WORLD, it became the game of the year 2002. The PS2 and XBOX versions were kind of slow and unsuccessful but they couldn't change the fact that the game became the best game ever for hundreds of thousands of players and it sold over 2 million copies.

The game, produced mostly by Illusion Softworks (now 2K Czech) in Brno, Moravia (Czechia) and distributed by Take 2 Interactive, is about Tommy Angelo who accidentally joins Don Salieri's mafia in the early 1930s. Tommy (you) is getting increasingly bloody tasks. The storyline that looks like a pretty good movie is kind of linear, with 106 main episodes full of driving, shooting, racing, emotions, love, betrayal, action, and a moral message. But there's still a lot of freedom how to solve the individual episodes.

But it was the physics of the game that was really astonishing. Everything occurs in the Lost Heaven City which is pretty much the same thing as the New York City. Three-dimensional graphics is nearly perfect. It takes a lot of time to drive through the city. I always thought that a team would need millenia to collect all the necessary data, textures, and create all the three-dimensional models.

The cops have artificial intelligence, trams, ships, and other cars work as they should, much like birds, waves, falling cigarettes and their smoke, fire, transparency and reflections from various materials, shadows, blood, and many kinds of weapons, among many other things. The motion of the people in the game was designed according to real actors whose motion was scanned. There are 60 types of cars whose physical characteristics coincide with 60 actual models from the 1930s. They respond to shooting and driving in a physically realistic way. You should look into the game yourself.


Since the very beginning, there have been understandable rumors about Mafia 2. However, nothing specific could have been heard about it for five years. This situation changed last Friday. The trailer from the game that will be shown this week in Leipzig, Germany had to be approved. Someone was making searches on the German rating agency's website and found ... Mafia 2. The secret has thus instantly leaked. 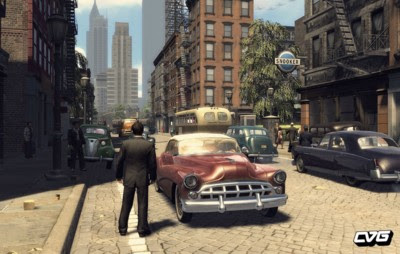 I can tell you much more right now. Mafia 2, to be released for PC, XBOX360, and PS3, is put into the late 1940s and early 1950s and the visual experience in this breathing city should be even better than it was in Mafia 1 and fully comparable to Hollywood movies. Here are five screenshots:
Well, I guess that those five years have made a difference!
Luboš Motl v 4:12 PM
Share