Sociology around the MAGIC experiment: update

The MAGIC collaboration (100+ people), together with five theorists, has posted their preprint about a measured delay of high-energy gamma rays during a flare in an active galaxy. 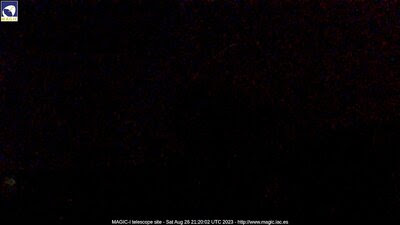 Markarian 501 is an active galaxy at redshift z=0.034 which, I believe, corresponds to something like 700 million light years distance from Earth.

Once upon a time, there was an exploding source of gamma rays over there that has sent us some gamma-ray signals. It is believed that the source is around 3 light seconds in size. The flare takes around 2 minutes or so. The gamma-ray photons have energy between 100 GeV and 10 TeV or so: you could call it the accelerator energy range.


The collaboration has measured, during at least one flare, a delay up to four minutes for photons near the upper end of the interval (10 TeV) relatively to the gamma rays with lower energies. I think that they should have written a fair paper with the text above and many additional numbers, graphs, and interpolations. For example, I can't understand why they only offer three simple graphs and not the full profiles of the intensity of gamma rays in their four bins as a function of time, among other things.

In fact, they have already submitted a similar preprint in February 2007 where the delay is attributed to gradually accelerating electrons that emit the gamma rays. I feel that the new twist included in the August paper is a matter of marketing.

While some estimates based on the extension of the magnetic field imply that the source is 3 light seconds in size, I would bet that the radius of a source that is able to produce such a dramatic fast signal, if we include the clump of matter that significantly influences the gamma rays, will be comparable to the length of the signal - up to 2 light minutes.

Now, do you know why the sky is blue? It is because of Rayleigh scattering, an effect whose rate increases with the fourth power of the frequency. Consequently, it is much more likely for high-frequency blue light to come reach our eyes from different directions than directly from the Sun which is why the sky is blue.

Even if the scattering inside this source or the previously reported gradual acceleration of the emitting electrons were not the reason, it is still possible for the high-energy rays to be delayed because of some dispersion along the path caused by more ordinary types of matter. The Universe is not a vacuum, after all.

However, all these comments would be rather boring. So they offer an interpretation based on "quantum gravity" - this term even appears in the title even though I believe that it is extremely unlikely that such an experiment has anything to do with quantum gravity. Given the fact that most of these theoretical Lorentz-violating papers they refer to were co-authored by the theorists in the recent paper, it seems that my opinion won't be that unusual. ;-)

What do they mean by quantum gravity? They mean phenomenological equations that violate the laws of gravity - general relativity - such as the local Lorentz invariance. According to these not-quite-justified models, the speed of light "c" for frequency "E" photons equals


where the exponent "n" is taken to be "1" or "2" (heuristic theoretical reasons but no one can really falsify either, except for people like me who can rule out both). The speed is always smaller than the speed of light, as you can see, while "M" is the characteristic "quantum gravity" scale. The higher energy you deal with, the more you deviate from the normal speed of light. The gravitational terminology is just about words: "M" is simply a scale that determines these modified dispersion relations.

For their data, an optimal fit gives you "M" near the usual Planck scale for "n=1" while it is around the intermediate scale "10^{11} GeV" for "n=2". The collaboration is not able to say anything about "n", indicating that any interpretation based on a particular simple value of "n" is probably too fast.

Related: Lorentz violation and doubly special relativity (DSR). You should realize that despite their marketing, DSR is neither among the first scenarios to suggest Lorentz violation nor the most convincing one. And DSR doesn't follow from loop quantum gravity!

I feel that the experimenters should have written what they have actually measured instead of selling one particular "sexiest" interpretation, in my opinion a very unlikely one, throughout the paper and in the very title. I think that quantum gravity (and string theory) imply an exact local Lorentz symmetry and there are many ways how to parameterize and describe the effect that they have seen.

More generally, it sounds strange to attribute a delay that is not much longer than the length of the flare to something else than the nature of the source itself. Of course, I would change my mind if they observed a delay that would be way greater than the width of the signals. That would indicate that the delay has something to do with the propagation of the radiation. The current data don't indicate such a conclusion too strongly.

It is probably fair to admit that my "conventional" interpretation of the events predicts that the high-energy gamma rays should be not only delayed but also spread over a longer time interval. As mentioned above, the paper doesn't seem to offer any information that would verify or reject this prediction. Or am I wrong?

If they believe that the effect is due to dispersion in vacuum, it shouldn't be hard for them to double or triple the delay/length-of-flare ratio in further observations of more distant sources, should it? In other words, their determined slope of the delay is 0.030 plus minus 0.012 seconds per GeV. At 2.5 sigma, I can still believe that it is zero and even the local dispersion effects don't exist. I am surely not the only one who finds 2.5-sigma signals unconvincing. If the effect is real, they should easily double the accuracy and get to 5 sigma, right?

Quite generally, I don't think that it is normal for big discoveries to appear in the form of small signals. Why? Because in particle physics or astrophysics, quantities are spread along huge intervals that span many (sometimes dozens) of orders of magnitude. If you pick a random size of the noise or a random size of a signal, their ratio is likely to be much smaller than one or much greater than one.

So you will either see nothing at all or you will see a clear evidence of the effect. Seeing a weak evidence of an effect is thus unlikely. So far, a weak effect was only a way to realize discoveries that were fully predicted in which the experimental apparatus wasn't strong enough, so they were raising its power before e.g. the top-quark was discovered. That's not the case here. For example, I don't see any other good reason why the delay should be almost exactly equal to the length of the flare except for saying that these two timescales are related because the delay has something to do with the source.

Needless to say, the main reason why I am skeptical about these quantum-gravity explanations is that I am convinced that quantum gravity and string theory prohibit any kind of Lorentz violation of this kind. But I might be wrong and Dimitri Nanopoulos et al. could be right, of course. If they really believe that they are right, they must surely be excited by every 2-sigma signal. ;-)

George Musser from Scientific American was the first blogger who responded to the new article. See also comments by Chris Lee at ArsTechnica.

Off-topic: at least 46 papers by Turkish graduate students, usually related to the gr-qc archive, turned out to be plagiarized. Many of them were accepted for publications in dozens of printed journals. The journals and arXiv are clearly flooded with papers that no one cares about which is why this thing can happen. Via N.E.W.

Incidentally, the nasty crackpot behind N.E.W. is again inventing dirty tricks how to abuse every sentiment, every statement of every person, and every piece of data. He doesn't care about the truth at all. I despise trash like himself. What I care about are the correct answers to various questions, and I don't think that violations of local Lorentz symmetry are justified rationally, not even in string theory, and I don't think that the non-stringy alternatives deserve a serious discussion. These opinions of mine of course shape my expectations about the correct interpretation of these results. I won't allow scum like P.W. to intimidate me.