My condolences to the families and friends of the victims in Minnesota. Sadly, two weeks ago, I wrote the following in "Market of ideas" and many e-friends remember it:

In the real world, bridges should have high enough capacity and they should be robust. If the probability that a bridge collapses under a car exceeded 0.0001% or so, the bridge would be clearly useless.

Nevertheless, statistics happens. There are safer bridges in the world. 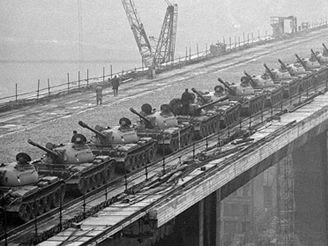 The Bridge of Klement Gottwald, the communist murderer-in-chief, that later became known as the Bridge of Self-Murderers or, less poetically, Nuselský Bridge, was tested on November 24th, 1970. Click to zoom in.


The communist party knew that it couldn't collapse during the test. If it did, the whole Czechoslovak military would be eliminated which sounds unlikely. In that case, the verdict would say that the culprit is cement. But cement would protest: "I wasn't there at all!"