The rings of Jupiter and Saturn seem to be changing but Uranus is the leader: its rings look completely different than 21 years ago when they were mapped by Voyager 2. 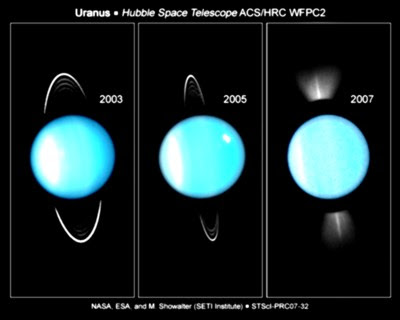 The innermost ring is getting much closer to the planet and the brightness of various rings is changing abruptly.

"The observations are the last nail in the coffin for climate change deniers," NASA spokesman Gavin Schidt told our blog. "We have 8 years and 157 days left to stop the climate change," Al Whore added, "if we don't act right now, the inner ring will fall to Uranus which is, as you might know even though it's very complicated, a radioactive material. The whole Solar System will simply explode. Boom."


His colleague Games Jansen agreed: "Uranus is a 800-pound gorilla. The dramatic changes at Uranus have no other explanation. That means that the reason is that we don't respect fossil fuels in usufruct. The catastrophic changes on Uranus show the fate of every planet that listens to the big fish and stays blue instead of becoming green. The debate is over. Amen."

Imke de Pater from UC Berkeley played the role of the court jester when she suggested that the changes could result from previously neglected frequent collisions with microscopic meteorites.
Luboš Motl v 8:14 AM
Share