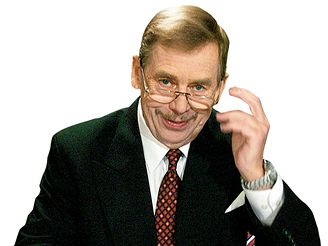 Václav Havel, the last Czechoslovak and first Czech president, has written his first play since the Velvet Revolution. It is called "Leaving" ("Odcházení").

I haven't seen it but it is supposed to be a funny variation of King Lear by Shakespeare - about a king who becomes insane after he loses power. This king was turned into Mr Vilém Rieger, a chancellor who leaves politics. Rieger looks like Havel himself. ;-)

"Do you know what I heard from Molotov during a cocktail party?" asks Mr Vlastík Klein, Rieger's foe resembling Václav Klaus.

The play was expected to appear in the National Theater but Havel has blocked it, mostly because the theater didn't want to hire his wife, and it was moved to the Na Vinohradech Theater.

Incidentally, a Spanish boss of the International Monetary Fund has resigned. The European Union nominated a French social democrat. But the following move by Russia looked like if they play chess. Russia nominated Josef Tošovský, the silent former boss of the Czech National Bank and the former Czech prime minister in a caretaker government after the "Sarajevo assassination" that unjustly removed Václav Klaus' government in 1997.

The Czech socialists instantly supported Tošovský's nomination while the government and the Prague Castle oppose it. It's being speculated that Russia wants to earn political points in the Czech Republic because of the radar controversy. Moreover, there are rumors that Tošovský, a former communist, has been a KGB agent. Russia's proposal is not completely hopeless because Putin's people argue that Tošovský has already won the backing of unspecified developing nations.

Well, the U.N. is not quite the same thing as the EU and things may become interesting.
Luboš Motl v 10:44 AM
Share