We have argued repeatedly that most feedbacks in the climate system are going to be negative. It is a general fact about stable thermodynamical systems. If positive feedbacks were dominant, the Earth would have already ended up in a runaway, exponentially escalating behavior during the billions of years of its existence. 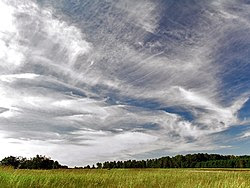 The low-altitude clouds have a clear cooling effect on the Earth but the high-altitude clouds, especially the cirrus clouds (see and click the picture - do you see why "cirrus" is a "curl of hair" in Latin?) composed of ice pellets and located about 8 km above the surface, may have an overall heating effect. They are believed to be mostly heat-trapping clouds. The politically correct approach is thus to also believe that warming creates additional cirrus clouds that trap even more heat and amplify warming.

However, Roy Spencer, John Christy, Danny Braswell, and Justin Hnilo use 30-60 days of "intraseasonal oscillations" from the tropics to argue that the cirrus clouds are the most important climate driver and their amount actually decreases if the temperature goes up. If that conclusion is right and could be used globally, one would predict 4 times smaller warming than if he doesn't take this thinning-cirrus effect into account. Their observations may also hypothetically be interpreted as evidence for Lindzen's infrared iris hypothesis. See

If you're interested in more details, they use high-resolution, daily data from 2000-2005, where the low-frequency signals are filtered out from the beginning. This is the final graph showing a tight correlation extracted from about 30% of the data:

The x-axis is the temperature anomaly in Celsius degrees. The y-axis is the net cloud radiative forcing (CRF), including both reflected short-wave (SW) and outgoing long-wave (LW) waves trapped by the clouds. Needless to say, the watermelons in the media will probably not tell you about this scientific article.

Thanks to Marc Morano.
Luboš Motl v 6:44 AM
Share