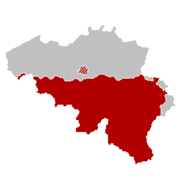 The red region is the French-speaking Walloon region. On its Eastern edge, you see some tiny German-speaking districts. The rest is the Dutch-speaking Flemish region which is richer - Northern regions typically are wealthier and Belgium is no exception. The dot in the middle - Brussels - is bilingual.

The country begins to study the Czechoslovak Velvet Divorce. A split is no longer taboo and some forces promote it much like the Slovak National Party did in the early 1990s. Brussels is the most confusing aspect of the plans. I think that if they followed the clean Czechoslovak logic, Brussels would have to become Flemish and the Walloon region would have to be compensated by other means.


I am not sure whether Brussels is the most stable capital of the EU one can imagine. Incidentally, Robert Putnam of Harvard has figured out that multiculturalism lowers group cohesion, satisfaction, and confidence in representatives. He didn't like this conclusion but finally he published it.
Luboš Motl v 10:17 PM
Share