One of the important observations relevant for the hypothetical role of trace gases in the atmosphere is the famous lag.

In the second part of the weekly dose of peer-reviewed skeptical literature about the climate, we again look to Science.

They study isotopes in sediment cores. The main result is that they can reconstruct the following chronology:

Not only the CO₂ lags by 1,000 years or so but the sea surface temperatures in the tropics lag, too. The deep ocean warmed much earlier than the surface. The authors offer hints that the warm water came there from the South where the primary changes - perhaps "increasing austral spring insolation" - occurred, followed by albedo feedback. 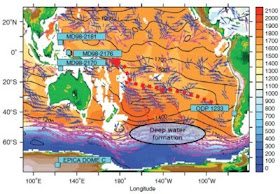 Figure 1: Southern Hemisphere, location of sites. The color indicates the depth of the isopycnal surface (sigma_t = 27.6 kg/m3) in meters

The authors also say a lot of politically correct stuff about the important role of CO₂ that directly contradicts their research but that has allowed them to publish these results in Science. The lead author argues that he doesn't want want people to think that CO₂doesn't drive the climate: it's just not the beginning, [the bulk,] and the end of it. ;-)