France: prepare for war in Iran

Just like today, I used to have mixed opinions about the Iraq war back in 2003 when it was getting started. Despite a lot of uncertainty, there existed beliefs that I found manifestly wrong.

For example, some hawks (and even some peaceful liberals) assumed that all people in Iraq actually hated Saddam Hussein and would welcome the U.S. troops as liberators. This belief looked completely ridiculous to me. Saddam Hussein received nearly 100% in the latest polls in which he participated. Such a high number is a result of his power but on the other hand, it is incompatible with the reality being close to 0%. You can't get more than 99% in the elections if you have less than 10%-15% of the population supporting you.

While in Czechoslovakia the percentage of "decided" supporters of the communist party would be in this 10%-15% interval, it was clear to me that the percentage would be much higher in Iraq and it would continue to grow in the case of an attack. The war in Iraq couldn't have been easy. It was always a war against a non-negligible part of a rather large nation.

But the anti-war people have always had even more bizarre beliefs.

One of the frequent comments would be that the trans-Atlantic relations would be destroyed forever. Four years ago, I would hear this comment hundreds of times. Why is it silly? Because it is based on the assumption that all citizens of Europe are unified in pacifism and that this ideology would moreover control Europe forever.

The reality is that there are dovish as well as hawkish voices in Europe, just like there are both of these voices in America. The numbers may differ but the fact about disagreements remains a fact. Moreover, it is not at all guaranteed that the dovish voices would control Europe forever. Only people who share beliefs with the believers in the "1000-year empires" and "Soviet Unions forever" may boast silly opinions about eternal military policies of Europe. In democratic countries, the typical lifetime of these attitudes is 4 years, namely the timescale separating two elections. 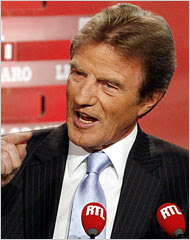 France used to be one of the main civilized opponents of the Iraq war but it is no longer the case. In fact, the new France is arguably ahead of the U.S. in its hawkish attitude to problematic regimes of the Middle East, especially Iran. Bernard Kouchner, the French (socialist!) minister of foreign affairs (previously healthcare minister) who also co-founded the peace-Nobel-prize-winning organization Doctors Without Borders told the world that is was necessary to prepare for war with Iran in the case of nuclear complications.

His attitude, much like the current French dominant attitude, is of course to try to save peace, negotiate, and impose sanctions on Iran that may go beyond the collective sanctions agreed upon in the U.N. and the EU.


The words about the war are strong but obviously relevant. The guy is blunt but he clearly reflects opinions that other French politicians are thinking about more privately. I would personally not start a war in Iran based on some vague signals or rumors about their military nuclear program. In my opinion, one should postpone similar "big" decisions for a hypothetical future situation that looks much more urgent. But I agree that it would be irresponsible if democratic politicians whose job description included the Middle East were assuming that a war with Iran is physically impossible and if the military leaders were not ready for a relatively swift action if needed.

Nicolas Sarkozy also knows (and has said) that Iran might be attacked if it doesn't curb its nuclear program but he predicts that the outcome would be a disaster. And I am afraid he is right. However, one must carefully compare the disasters that result from action with those that result from inaction. It is not trivial mathematics.