The LA Times argue that there is an inherent difference between left-wing brains and right-wing brains. 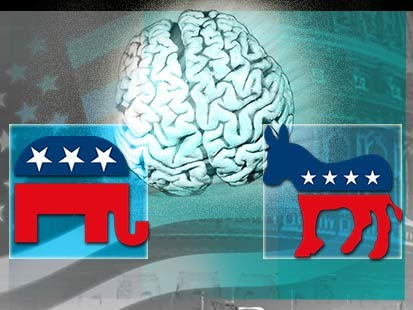 Even outside the realm of politics, leftists are open to new experiences which means that they are hypocrites and flip-floppers who tolerate ambiguity and contradictions. Conservatives tend to be more structured and persistent in their judgments: they are generally trustworthy and self-consistent people. In an experiment, leftists exposed higher brain activity when they saw a W. Not sure whether it was because of Dubya. ;-)


Denise Gellene argues that these differences also favor leftists as the authors of scientific revolutions. That's a plausible hypothesis but not an overwhelmingly proven one. The key scientific revolution of the 20th century science was quantum mechanics and Werner Heisenberg who was very right-wing was one of its key figures: he was the person who understood the new spirit of quantum mechanics more than anyone else. Be sure I could give you other examples (Yuval Ne'eman, Edward Teller) but Heisenberg is the best guy for these purposes.

Finally, especially because I think that right-wingness of a brain is positively correlated with its maleness, I have a very different set of ideas what actually attracts left-wing people to the Academia - mostly things related to funding schemes - but I am open-minded about these explanations. Why? Because what the LA Times write about the correlations in general confirms my experience and I think that my brain is very conservative according to these criteria. What about yours?

Concerning theories in physics, I think that a natural conservative position would be skeptical towards string theory (or QCD, or anything else that is new enough). Some people are clearly more conservative in this respect than I am. It seems sensible to say that a critical attitude with respect to string theory naturally belongs to creationists such as William Dembski and Roger Schlafly while DailyKos fans Peter Woit and Lee Smolin are just anomalous guests in this group of reactionary bigots.

Via CapitalistImperialistPig (whose brain is a far-left stinky fluid - recall that the nickname is just a parody of his real name that is CommunistSocialistEnvironmentalistSwine).
Luboš Motl v 8:39 PM
Share