Benny Peiser has informed us about lab experiments that seem to contradict the dominant theory about ozone depletion:

Because subscription is required, here is the extracted text, a technical abstract with some basic results, Noel Sheppard's reaction, and Ronald Bailey's news story.

Update: RealClimate.ORG have published a reaction by Drew Shindell whose content is, as far as I can say, zero. He only says blah blah, the experiment could be wrong, and if it is not wrong, the right value of the relevant quantity (see below) is surely as close to the old values as possible, blah blah. These are universal biased talking points that a person familiar with some scientific jargon can emit without knowing anything about the subject whatsoever. Junk.

Twenty years ago, when the ozone-saving "Montreal protocol" became a part of our lives, I didn't know much chemistry. Some of the chemistry that our 300-pound chemistry teacher wanted us to know looked suspicious. I only figured out why most of these things were right after I started to understand quantum mechanics. This sudden insight that I have vastly underestimated what the experts had known has also led me to accept the freon explanation of the growing ozone hole. I was never thinking about this problem much. 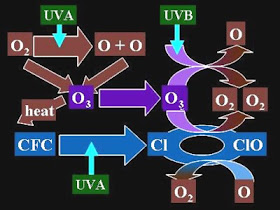 UVA in the left upper corner should be UVB.

Ozone, O₃, absorbs ultraviolet radiation which is why it is important for protecting us against unhealthy UV radiation. How do you determine how much ozone you should expect in the atmosphere?


The relative concentration of oxygen and ozone is determined by the balance of these two categories of reactions. The first reaction occurs because of ultraviolet photons with wavelength below 240 nm that split a normal oxygen molecule O₂into two oxygen atoms O. One of them combines with another O₂to give you an ozone molecule, O₃.


The opposite reaction, recombination, doesn't need any radiation and involves an O₃ molecule that reacts with a free oxygen atom O to give you two O₂ molecules. Once you calculate the rate of these two reactions, you obtain your first guess for the concentrations.

That was clearly too simple. But the atmosphere is not composed out of oxygen atoms only. Moreover, the concentrations above could perhaps be expected to be rather constant and the calculations couldn't explain growing holes. So you really want to consider other compounds and their effect.

Chlorine and bromine atoms are believed to be the key elements that destroy ozone in catalytic cycles. It means that chlorine and bromine are needed at the beginning but you obtain the same atoms back in the end. They just allow the "ozone to oxygen" reaction to work. The simplest example is

Whether the models involving these reactions are correct or not could be tested by looking at the concentrations of O, ClO, and other players but I am not really sure whether it has been done and whether there are sufficiently competent people who are doing these things.

The question is how you get chlorine and bromine atoms. Start with a freon, technically a chlorofluorocarbon (CFC) that we used to have in all deodorants before we realized that they can easily be replaced by non-controversial alternatives (unlike fossil fuels). An example is CFCl₃ and the following reaction:

It looks like we have all the necessary reactions and players to get a simple model of ozone depletion. For technical reason, the free chlorine atoms Cl (radicals) are not obtained from CFCl₃ but from dichlorine peroxide, Cl₂O₂ or "ClOOCl". But the process still requires a photon. The relevant "2 O₃ becomes 3 O₂" reaction has these components:

People apparently didn't know what was the rate of the reaction on the second line, a photolysis rate.

The guys in the past used to determine their estimate largely to get a convincing picture of ozone depletion. Well, this is curve-fitting and such estimates may often be wrong. As we have repeatedly emphasized, you shouldn't be fitting a few quantities to get a simple description of a complicated system. Quite on the contrary: you should try to separate the complicated system to components, analyze these components as independently as you can, and therefore obtain as many independent numbers from experiments as you can. You must always be ready to accept that a complex system is described by a complex set of equations and your intuition may fail.

Even though this should have been a good enough reason to make lab experiments with all these compounds, NASA's Jet Propulsion Laboratory apparently did these experiments only recently. Their experiments were probably not trivial and required some low-temperature engineering. What is their result for the rate of photolysis of Cl₂O₂?

That's a huge problem. But only Markus Rex of Potsdam was brave enough to look at the ozone depletion theory with these new data. A lot of things have obviously changed. A dramatic conclusion is that

At least all quantitative features of the models - that have been considered a part of the "scientific consensus" - suddenly become uncertain again. One modest implication is that we certainly no longer know which molecules are actually important for ozone depletion and whether most of this process is due to completely different reasons, perhaps unrelated to chlorine and bromine.

This is a cautionary tale. The possible analogy between the photolysis rate of Cl₂O₂ on one side and climate sensitivity on the other side couldn't be more obvious. The climate sensitivity may also be up to 10 times smaller than assumed in the most "pessimistic" CO₂-dominated climate-change models.

I have personally viewed the ozone depletion theory to be much more reliable than man-made global warming. It mostly dealt with some compounds, chemistry, and radiation in the stratosphere. No complexities such as different kinds of overlapping clouds etc. seemed to be relevant there. The science should have been straightforward. It wasn't.

Are we sure that these three men deserved their Nobel prize in 1995? I am no longer sure.

We should be much more cautious about the statements that the "key" process in a complex set of events has been identified. We should try to isolate the phenomena as much as we can and measure most of them in the lab whenever it is possible. And we should never think that we can determine many microscopic quantities (such as CO₂ sensitivity, cloud feedback, and many others) from one experimental number (such as the global mean temperature trend). It's simply not possible in complex systems.