The new issue of Physics World is dedicated to a somewhat more science-oriented - and thus more friendly - look at string theory than what we have seen in 2006-2007 and what is arguably over.

A testing time for strings

They write, among other things,

But look into string theory in even a little detail, and it is clear why so many young physicists are lured into the field, as this month's special issue of Physics World reveals. First, although the details need to be worked out, string theory naturally unifies quantum mechanics and general relativity - two of the pillars of physics. Second, string theory is very much guided by problems in the real world - such as questions over the quark-gluon plasma and the entropy of black holes - no matter how remote these might seem.

More importantly, you should read Stringscape (PDF), Matthew Chalmers' new 13-page-long review of the history and the current state of string theory. There are many interesting things, including a "compliment" from Sheldon Glashow:

String theory is different to religion because of its utility in mathematics and quantum field theory, and because it may someday evolve into a testable theory (aka science).


Many other people have a lot of other wise things to say, except for one additional comment by Howard Georgi who suggests that the attraction of string theory is 40% caused by its content and 60% by the stellar intelligence of Edward Witten. I think it's complete rubbish. Witten is no God but rather Primus inter pares. For example, if Georgi actually knew how small a number of people jump on the latest Witten's "bandwagons" - which are actually fascinating deep discoveries that would deserve many more people - he might change his mind. 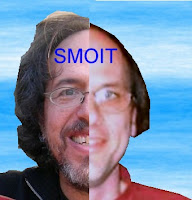 Swolin, a common term for two notorious crackpots coined in Santa Barbara, was renamed to Smoit, a competing term invented at Stanford. ;-)

Physics World is closer to professional physics than regular newspapers and even the likes of Nature and Science which is why they understand the situation better. Instead of "giants" such as Peter Woit, Lee Smolin, Sean Carroll, CommunistSocialistSwine, Lawrence Krauss etc., they offer the voices of Lenny Susskind, Sheldon Glashow, Gerard 't Hooft, Michael Green, Howard Georgi, John Ellis, Steven Weinberg, Juan Maldacena, David Gross, and Edward Witten. Of course, most of them are enthusiastic. But the recent dishonest, slanderous campaign in the generic media has had a devastating effect that goes well beyond the general public.

For example, a month ago or so, I was offered a job at the Perimeter Institute. Now, I view a private institute such as the PI to be the optimum arrangement of scientific research. But after some analyses who is there at the PI and how they think about science, the answer was, of course, No, thanks, your institute is literally overrun by cranks.

They effectively control the theoretical physics section of the institute and determine its atmosphere. A similar, mostly hostile atmosphere exists at most universities where bad physicists are more charismatic than the local string theorists and other serious theoretical physicists: that's because various Smoits have transformed physics in the eyes of the public into a dirty P.R. game with oversimplified concepts and emotions. The list of places that have been influenced doesn't include Santa Barbara, Stanford, MIT, Harvard, Princeton, and a few others but it is beginning to include many other schools that used to be good.

At any rate, you should read Matthew Chalmers' Stringscape which is one of the best popular texts ever written about string theory.

Matthew Chalmers also offers a lucid answer to 50% of Smoit, pointing out, among other things, the inconsistency of Woit's description of string theory that is supposed to be unfalsifiable as well as already falsified at the same time ;-)

In the following, October issue, the blog that all readers know very well should be featured. ;-)
Luboš Motl v 12:08 PM
Share