The U.S. authorities have analyzed the new video from Prof Osama bin Laden. The video looks authentic and new - bin Laden refers to Gordon Brown as well as Nicolas Sarkozy as leaders. He looks younger - no gray hair anymore. According to Allah, it is politically incorrect both to trim or color your beard but as you will see, Allah is no longer the main player of this game anyway. ;-)

explain that he doesn't sound as an evil terrorist but rather as a generic peaceful left-wing professor who hates the corporations and capitalism. You might say, Prof Osama bin Laden is just another Prof Noam Chomsky. In fact, this is more than just an analogy. Prof Osama bin Laden explicitly endorses his counterpart from MIT:


"Among the most capable of those from your side who speak to you on this topic (the war in Iraq) and on the manufacturing of public opinion is Noam Chomsky, who spoke sober words of advice prior to the war. But the leader of Texas doesn't like those who give advice."

Rick Perry could be somewhat sad. Well, I hope that these clear words will make the links between America's far left and the Islamic terrorists somewhat less controversial.


Prof Osama bin Laden indirectly encourages Americans to choose Noam Chomsky - the second most beloved Westerner after Whitney Houston - as the president, to accept Islam, and he blames the Democrats for various failures to remove Bush: Osama bin Laden's opinions are identical to the opinions by CapitalistImperialistPig and thousands other "progressives" in the fogosphere. A more positive point of his talk is that he proposes zero taxes. Instapundit supports the zero-tax Chomsky/bin Laden ticket. ;-) 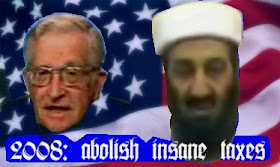 Prof Osama bin Laden also has the following inconvenient truth to tell us about global warming:

"The life of all mankind is in danger because of the global warming resulting to a large degree from the emissions of the factories the major corporations... And despite this brazen attack on the people [referring to global warming], the leaders of the West - especially Bush, Blair, Sarkozy and Brown - still talk about freedom and human rights with a flagrant disregard for the intellects of humans?"

Well, the voice of this authority should finally settle the debate! :-) Just like Rev James Hansen, Prof Osama bin Laden explains that global warming is accelerating. His brothers have the duty to continue to kill Americans in the Middle East while the main thing that Osama bin Laden demands from the Americans is to observe the Kyoto accords. :-) Various political topics are apparently linked. So is George Bush finally going to respect the dreams of Al Gore, Enron, and Osama bin Laden? 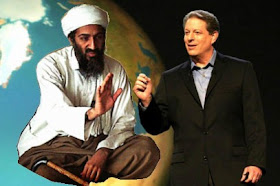 Osama hints that he may want his own diary at DailyKos.com but because of the huge competition over there, it is going to be harder than his Kyoto demands. The Kossacks tell him that just because he has the same opinions about politics as they have and just because he admires the same icons as they have doesn't mean that he is a leftist. ;-) Moreover, they believe that it's not Osama on that video. :-)

If Osama were born in the U.S. and if he had avoided various kinds of Islamic influences, he would probably become a standard "progressive". And in his new tape, he simply tries to win Americans on his side and to help the "progressives". In fact, I feel that he is kind of sorry about 9/11 just like any partially sane person would be after having done what he has done. I am pretty sure that these "progressives" do realize that they actually agree with him.

But what Osama doesn't get is that it is simply impossible in the U.S. to publicly support him, perhaps the most famous killer in the world today. The assumption is that such a killer should be isolated and his opinions must also be sick. So despite his agreement, the effect of his tape will inevitably be to lower the self-confidence of his U.S. leftist allies.

Next Osama's audiotape will be released on December 29th, 2007