You Know Who has pointed out the following cool paper by Candelas, de la Ossa, He, and Szendröi from June 2007 that has been, so far, largely ignored (except for Kate Land who happens to be from the same Oxford):

Triadophilia: a special corner in the landscape

Just to get you into the context. We're looking for the right compactification to describe nothing less than everything. ;-)

Imagine that two people, let's call them Kreuzer and Skarke, give you the following picture that shows possible gadgets designed by two additional Gentlemen, let's call them Calabi and Yau: 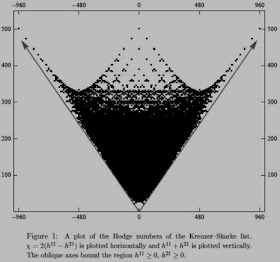 Every black point in the graph is a house. Or a universe, if you wish. They ask you: where do you want to live?

The plot above is an incomplete list of possible Hodge numbers of the Calabi-Yaus. The horizontal axis is twice the difference of the non-trivial Hodge numbers while the vertical axis is the sum of these two numbers. Both numbers must be non-negative which means that only the mostly black quadrant is allowed. The graph exhibits mirror symmetry in the naive sense which is a consequence of mirror symmetry in the technical sense. There are 30,000 dots in the graph, possible values of the Hodge numbers, but because there can be inequivalent manifolds for a given Hodge diamond (different apartments in the same house), the total number of manifolds may be as high as 500,000,000.


Well, the anthropic people won't hesitate and they put their fingers at a random place somewhere in the black region. We're typical, after all. ;-) The most radical ones will argue that the list you gave them is incomplete (correct) and the (almost) whole infinite quadrant should be black: their finger will escape to infinity. These are great guesses according to the anthropic philosophy but they happen to give a very wrong number of generations. ;-)

Even if experimenters didn't tell you that there should be just three of them, you might think that there could be something wrong with the vacua with too many generations once you break supersymmetry and lose control.

Many of us will therefore take some liquid and pour it into the graph. It will be stuck in the lower corner - with the minimum allowed values of the sum of the Hodge numbers. As you can see, extremely small values of the Hodge are not allowed. So we will pick numbers such as "h11=h21=3".

Instead of getting lost in the landscape, we end up with exactly the same Hodge numbers and exactly the same manifolds that we discussed e.g. in January 2005 in the context of models by Braun et al. Search for 3=3 on that page. In that text, I argued that the manifolds with very small Hodge numbers should be given special care because of this very property as natural candidates for the right vacuum. Well, I am no longer the only one.

Generations in the 1980s

As the fans of the Holy Trinity know, 3 is a nice number because it is the number of light generations. ;-) In the old Calabi-Yau heterotic era of the 1980s, the canonical way to realize our three-generation world within string theory was to find a Calabi-Yau manifold with "chi=6" or, to simplify conventions, its mirror with "chi=-6".

Tian and Yau almost instantly found two distinct Calabi-Yau manifolds with "(h11,h21)=(6,9)". If we already have two manifolds with "chi=-6", how many are missing to get the right number? Yes, we need one more to have the holy set of 3 manifolds. :-) Schimmrigk found another manifold with the same Hodge numbers soon afterwards. You should be sure that these are not random mathematical structures that you hear about once in your lifetime. To make things more dramatic, the third manifold was also found to be physically equivalent to a Gepner model by a guy whose name happens to be Gepner. ;-) Gepner models are very rare animals.

This is the classical era of the 1980s. Under some assumptions, there were not 10^{500} but rather three different candidates for a theory of everything. Moreover, Brian Greene showed that the manifolds belong to the same irreducible family. Further searches for "chi=-6" manifolds ended up with thousands of new Calabi-Yaus with wrong Euler characters. Even if you look at the broader corner, e.g. "h11+h21" smaller than 22, you still find a very small number of topologies. The "record" manifold has "h11=h21=2" but seems to be unusable for phenomenology.

In this century, people like to have non-trivial fluxes or, in this heterotic case, bundles on their pet manifolds. Technical obstacles that used to cause problems to Friedman, Morgan, and Witten were overcome in Pennsylvania and realistic heterotic models were recently constructed, as we have repeatedly reported. They are based on various quotients of "chi=0" manifolds - manifolds that may be self-dual under mirror symmetry although a full proof is not available.

The father manifolds used in the Pennsylvanian constructions can be connected via conifold transition. But this transition is only relevant for type II theories. Is there a counterpart in heterotic string theory, a theory that doesn't have D-branes that could get condensed? The answer is arguably Yes. It turns out that Edward Witten has thought about them long before me and long before all of us and he invented the term "transgressions" for these transitions in which nontrivial bundles tolerate and survive a geometric transition that you would otherwise call a conifold transition in the type II case.

In the rest of the paper, Candelas et al. demonstrate that the father manifolds are related by conifold transitions and the daughter manifolds are probably connected via transgressions because all necessary conditions seem to be satisfied. Ron Donagi and Burt Ovrut may finally have a reason to transgress all differences and to love each other. ;-)

In this sense, the modern models with bundles are really equivalent to the old models from the 1980s.

And that's a pretty powerful memo, even though it's not quite mine. ;-)
Luboš Motl v 3:49 PM
Share