Václav Klaus in the United Nations: a transcript

It would be a tragic mistake to prematurely proclaim victory of one group of scientists over another. Costs of a fight are high, benefits are low. Countries should act individually. The talk in the I. adaptation section (video, live at channel I) is expected around 10:55 EDT.


A 9-minute video (6.99 MB) containing mostly Klaus' speech is available in the IVR format playable by RealPlayer 11; an ordinary RealVideo stream is here, too, much like YouTube video 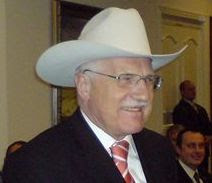 Politicians know that they have to act when it is necessary. They know that their duty is to instigate public-policy responses to issues that could pose a threat to the people of their countries. And they have to form partnerships with colleagues from other countries when a problem cannot be “confined” within national boundaries. To help doing it is one of the main reasons for the existence of institutions such as the United Nations.

However, they have to ensure that the costs of their “solutions” will not be bigger than the benefits achieved. They have to carefully consider and seriously analyze all their initiatives. They have to do it, even if it may be unpopular. It has to be done. I congratulate Secretary General Ban Ki-moon on organizing this conference and thank him for giving us an opportunity to address the issue of climate change. The consequences of acknowledging them as a “real, big, imminent and man-made threat” would be so enormous that we are obliged to act more than responsibly. But I am afraid this is not the case now.


Several points must be made to bring the issue into proper context:

Contrary to artificially-created worldwide perception, the increase in global temperatures has been – in the last years, decades and centuries – very small by historical comparison, and practically negligible in its actual impact upon human beings and their activities.

The hypothetical threat connected with future global warming depends exclusively upon forecasts, not upon past experience. These speculative forecasts are, however, based on relatively short time series of relevant variables and on forecasting models that have not been found reliable when attempting to explain past developments.

There is no scientific consensus about this issue. There exists an unresolved scientific dispute about the causes of recent climate changes. An impartial observer must admit that both sides of the dispute – the believers in man’s dominant role in recent climate changes, as well as the supporters of the hypothesis about their mostly natural origin – offer arguments strong enough to be listened to carefully by the non-scientific community. To prematurely proclaim victory of one group over another would be a tragic mistake.

As a result of this scientific dispute, there are those who call for imminent action and those who warn against it. We have to choose. Rational response depends – as always – on the size and probability of the risk and on the magnitude of the costs of its avoidance. As a responsible politician, as an economist, as an author of a book about the economics of climate change, with all available data and arguments in mind, I have to conclude that the risk is too small, the costs of eliminating it too high -- and the application of a fundamentalistically interpreted “precautionary principle” a wrong strategy.

Even the politicians who believe in the existence of a significant global warming, and especially those among them who believe in its anthropogenic origin, remain divided: some of them are in favor of mitigation, which means trying to control global climate changes (and are ready to put enormous amounts of money into it), while others rely on adaptation to change, on modernization and technical progress, and on favorable impact of the future increase in wealth and welfare (and prefer putting public money there). The second option is less ambitious and promises much more than the first one.

The whole problem does not only have its time dimension, but a more-than-important spatial (or regional) aspect as well. This is highly relevant, especially here in the UN. Different levels of income (and wealth) in different places of the world make worldwide, universal solutions costly, unfair and to a great extent discriminatory. The already developed countries do not have the right to impose any additional burden on the less-developed countries. Dictating ambitious and for them inappropriate environmental standards is basically wrong and should be excluded from the menu of recommended policy measures.

My recommendations are as follows:


We should trust in the rationality of man and in the outcome of spontaneous evolution, not in the virtues of political activism. Therefore, the answer is adaptation, not attempts to mastermind the global climate.

Finally, I want to mention that if we want to save energy, we should start now and here and reduce the air-conditioning in this building. Thank you for your attention.