Next week, loads of dopes who have been elected as members of the European Parliament are probably going to approve a new fantastic regulation. Twenty percent of each new advertisement for a new car must be dedicated to a cigarette-style health warning. See 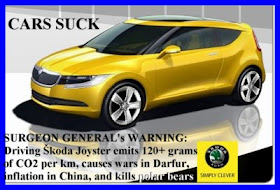 Figure 1: Commercial. Škoda Joyster kills. If you buy this car, you will become a dirty stooge of the oil industry. But the car only kills 2/3 of the people killed by the new Mercedes or BMW.

I tried to exaggerate but the percentage of space dedicated to environmental warnings in my ad actually fell short of the required 20 percent. Wow. The complementary sane news is that the new draconian limits on grams of CO2 per kilometer will be postponed.


This combination of news is nothing new. Even more terror and dumb propaganda causes even less positive effect on anything than ever before.