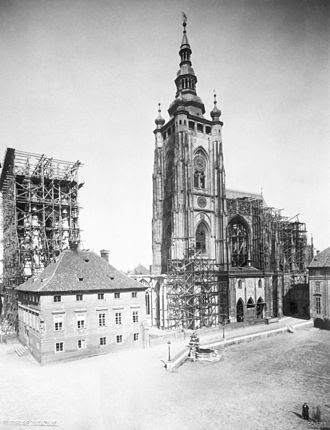 Figure 1: The Cathedral of Saint Vitus in 1887. The construction started in 1344 and ended in 1929. ;-) On Wednesday, we did a cool guided tour to secret places of the Cathedral and the Castle.

On October 14th, 1887, when the Prague Castle looked like the picture above, Prague experienced a pretty cold weather with -0.7 Celsius degrees of temperature. Today, 120 years later, the record was finally updated. And Šerák, a peak in Moravia, has seen the first snow. It is not clear whether the record is going to be broken tomorrow, too: On October 15th, 1784, Prague saw -1.5 Celsius degrees. 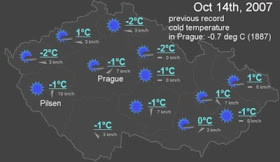 This week I face the first freezing temperatures in Europe after 11 years because in September 1997, I left for a trip to the U.S. that was longer than expected. Because I was traveling to Europe every summer, I thought that I was in touch with everything that takes place in Czechia. And it was almost the case. But such an argument neglects a subtlety: seasons.

In fact, I've never been in the U.S. during one month after the Independence Day, and this is my first autumn in Europe after 11 years. There are interesting emotions associated with these experiences. Things are a little bit different during different seasons.

Equally importantly, the air in Pilsen is a little bit different than the air in Piscataway or Cambridge. Different plants are emitting their aroma. The level of humidity is different, too. Moreover, sometimes we can breathe a characteristic mixture of the oxides of sulphur, carbon monoxide, and other compounds. ;-) Don't get me wrong: the air is much cleaner - literally by orders of magnitude - than it used to be when I was a kid. But still, there exists a certain "fingerprint" that is able to bring one's memory back to the childhood.

There is one more difference related to aromas. When most people from Eastern Europe traveled to the West for the first time, they had to notice that there was much more perfume in the air in the shops and malls. Czechoslovak retailers just didn't want to fill the air with perfumes or they didn't care. Also, the bakeries were much less scented than their Western counterparts. Today, when the Czech shops and malls are more or less visually indistinguishable from their German or American counterparts, I still think that they are less fragrant.

The way how aromas are stored in the long-term memory of the brain must be pretty funny.
Luboš Motl v 8:46 AM
Share