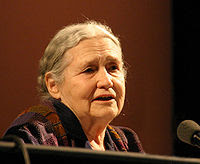 Doris Lessing, the winner of the 2007 Nobel prize for literature, has been described as an epicist of the female experience. You might think that she is just another colorless feminist, the kind of literary foam that has been awarded many recent awards. That would be highly inaccurate, to say the least.

re-published her op-ed from 1992, the last year when her writing was readable, according to the newspaper. She describes political correctness as the most obvious legacy of communism that hasn't yet been eliminated. Language is the first aspect to see this fact: both spiritual frameworks like to fill pages with mind-deadening jargon that lacks any content.

Those of us who have lived through communism can surely recognize a few clichés such as the "interpenetration of opposites", a universal principle of Marxist dialectics. ;-) Lessing argues that many Western journalists have been writing in a purely Marxist style without realizing it. Needless to say, many more journalists and sociologists are doing so today.

Another part of the communist or politically correct writing is that the journalists assume that every writer (or everyone) should be doing the same thing - when they ask "What should writers do...?" A popular universal cliché from the Marxist discourse is "commitment" and its newer variation, "raising consciousness". Lessing uses exactly these words. It just happens that the IPCC and Al Gore have received a Nobel prize for "raising consciousness" yesterday. Only Lessing and a small percentage of enlightened readers of the New York Times realize that these are Marxist mind-deadening, propagandist pseudoideas.

Al Gore should get a proper thrashing rather than an award for these methods.

Apple has a fresh, brand new design. Click the picture to learn more. Thanks to Rae!

"Raising consciousness", "political correctness", and "commitments" are continuations of the old bully, namely the communist party line, she explains - even though this is certainly not a new revolutionary discovery for your humble correspondent. ;-)


Lessing argues that most of the contemporary literary critics are Marxists as well. A typical aspect of their attitude is their opinion that a novel must be "about something". So they always invent one topic that your novel is "all about": the Palestinian problem, or AIDS, or something else. This is a way of thinking directly inherited from socialist realism where novels had a clear goal in the scheme of propaganda. A story written for the sake of storytelling is a "reactionary" concept. ;-)

Lessing speculated that "political correctness" was born exactly when "communism" was dying because the emitted communist methods of thinking and controlling the society were simply absorbed by different people, often without admitting it. She argues that arts are incompatible with these rigid frameworks and with witch hunts because they are always unpredictable, maverick, and tend to be uncomfortable (or, using modern adjectives, inconvenient).