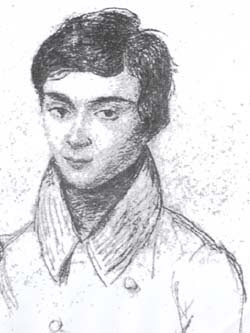 Évariste Galois was born on October 25, 1811 and died 20.5 later - mostly because of a woman although the story has been made more romantic than it actually was. While the time interval that this staunch Republican ;-) has spent on this planet seems short, he became a co-father of modern algebra nevertheless. He both invented the concept of group and gave it its name.

The most well-defined task that has led him to these discoveries was the question whether the equation of fifth degree can be solved in radicals - whether there exists a compact formula that includes various roots (sqrt and higher) to calculate the roots (solutions) of the quintic equation.

At the high school, I was also obsessed with this problem - although, frankly speaking, I abruptly found it less crucial when I refocused on physics. Eventually, my formula for the equation of fourth degree was written on two pages - also because I didn't set the cubic coefficient to zero. A week later, I realized that it could have been a good choice but I already wanted to finish the general case. And I was only able to find a satisfactory proof that the quintic equation can't be solved in radicals because I knew the result. ;-)

Let me just mention a popular, truly elementary version of these arguments.

I probably had to use the fundamental theorem of algebra - that every equation of n-th degree has "n" complex solutions - but we're going to discuss more fascinating aspects here that depend on the degree of the equation more intimately.


Because "(x-x1)(x-x2) = x^2 + bx + c", you can see - by expanding the product - that "-b = x1+x2" and "c=x1.x2". So the problem is to invert these relationships and calculate "x1,x2" from "b,c". That's not quite trivial because both "b" and "c" are completely invariant under arbitrary permutations of "x1" and "x2" (in the quadratic case, there is only one non-trivial permutation). But "x1" itself is surely not invariant under the permutation as it becomes "x2". So how the hell can we calculate an asymmetric animal such as "x1" from "b,c" that are symmetric?

In Europe, this trick has probably been known for 1,000 years or so. Its discoverer had to be very happy to find it.

Once again, the coefficients b,c,d are fully symmetric under all six permutations of "x1,x2,x3". So how do we solve it in this case? Well, use the letter "W" for a non-trivial cubed root of unity (a complex number such that "W^3=1"). Now take the following cyclically democratic combination of "x1,x2,x3":

This is not quite symmetric under the permutations but it could play a similar role as "x1-x2" in the quadratic case, you might think. So take the third power of the combination above. Will you obtain a result that is invariant under permutations? Not quite because the coefficient of terms like "x1^2.x2" and the other two cyclical permutations will be "3W" while the coefficient of the opposite three cyclical products such as "x1.x2^2" will be "3W^2".

But again, this problem can be solved using the trick from the quadratic equation. So inside the formula for the cubic equation, you will find a square root whose result will count the two possible results ("x1^2.x2+x2^2.x3+x3^2.x1" and the sum of the three "opposite" terms) with a relative minus sign. But this square root will be embedded into a cubed root and you will need to take some polynomial actions. You will have to take a combination of "-b=x1+x2+x3" and two "opposite" cubed roots that represent "x1+W.x2+W^2.x3" and the "opposite" combination with "W,W^2" interchanged.

You should see a new lesson here. When we were taking the square root inside, the expression had to be symmetric under some subgroup of "S_3" of all permutations. In this case, it was "A_3", the group of cyclical permutations which is the same thing as even permutations in this case of three elements: in this case, "A_3" is isomorphic to "Z_3". The subgroup "A_3" sits "firmly" inside "S_3" in the sense that it doesn't depend on the identity of the elements "x1,x2,x3". Mathematically speaking, for a given conjugation, the set of conjugate elements is again "A_3". We call such a subgroup "normal" or "invariant".

Now we're getting fast, so let's try the fourth degree. The coefficients in the equation are

It is not terribly symmetric under all permutations. But if you square it, you get closer to a symmetry except that "x1.x2" and "x3.x4" (1/3 of mixed terms) enter with the opposite sign than the remaining four terms (2/3 of mixed terms). But this task to "break" the symmetry down to "A_3" is already known from the cubic equation. After some time, you can discover the right formula. Inside the roots, you will find the roots that copy the tricks from the cubic equation but they are used not to calculate "x1,x2,x3" but something like "x1.x2+x3.x4" and its various permutations (there are three different ways how to divide "x1,x2,x3,x4" to pairs - and these three different ways are treated much like "x1,x2,x3" in the cubic equation).

Again, the first roots that you must calculate must be invariant under a normal subgroup of "S_4". Note that "S_4" has "4!=24" elements and the relevant subgroup is "A_4" of twelve even permutations. Surprisingly, this "A_4" has its own normal subgroup, "B_4", that has 4 elements, and is isomorphic to "Z_2 x Z_2". It is the group of even permutations of "x1,x2,x3,x4" where you find no "triangle" in the decomposition into cycles, just transpositions. You need this smaller normal subgroup of "A_4" as you construct "layers" of the formula that are further from the very internal roots. But it can be done.

Can you solve a general equation of fifth degree? Not really. Why not? Well, you can still construct some expressions, using a square root, that will distinguish even and odd permutations of the roots: you can break "S_5" to "A_5" (its normal subgroup), if you wish. But then you will be instantly stuck. You won't have any clue how to continue. The reason is that "A_5" has no non-trivial (different from "{identity}" and "A_5" itself) normal subgroups.

Galois had to invent all these concepts, groups, normal subgroups, their properties, and their role for the analytical structure of the polynomials. If you take a hypothetical formula based on roots that solves the quintic equation and if you carefully study how its components - especially various quadratic, cubic, and higher roots in it - behave under various permutations of the roots of the equation - you will be able to prove that such a formula can't exist. The higher-order equations can't be solved either because if you had a formula for such a 6-th order equation, you could take a limit and obtain a quintic formula, too.

When you're finished, write it down very quickly because you have a duel tomorrow with a bastard because of a woman whom you passionately love and you may very well get killed! ;-)