German company does geological work for the Brdy radar

We have made another bike trip to Míšov in the Brdy hills. 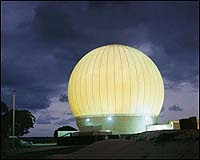 Today, it was very easy to check that we have found the right peak, 718 meters above the sea level. Intense and noisy work was in progress. The employees of a German geological company answered - in English - that they were just drilling a water well. They are perfectly trained to give the "right" answers, in a rather friendly way.

We were told by someone else that a German company was chosen instead of a Czech one because it was ... cheaper!

A steak and a beer in the Míšov grill was helpful after those 20 miles in the beautiful forests. The owner of the grill is an entrepreneur but she explains that virtually everyone else in the village (except for the mayor) is an anti-radar communist. The Czech government vowed to pay about USD 60 million of compensations. For this money, I would allow Putin to build a Russian radar in Pilsen. ;-)

I won't be able to post too much in the following two days because I began to replace the floor in my apartment. That requires me to remove lots of floor tiles and do many other things before a new floating floor may be installed. Sorry.
Luboš Motl v 7:48 PM
Share