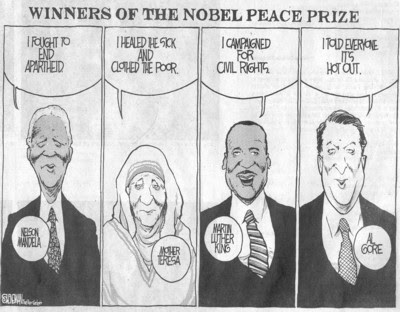 Friday, October 12th, 2007 is a day that has transformed the Nobel peace prize into a gigantic joke at least for one year. People who are co-responsible for one of the most serious sources of international tension and whose goal is to keep the third world in poverty and to clip the growth in the first world were identified as heroes of peace.


We are not the only ones who is surprised by the choice. See Czech president's reaction. Also, most CNN.com readers express disdain for Mr Gore and the prize. Hollishillis created a documentary film to calm down her anger. ;-) Marlo Lewis criticized the award on CNN.

Gore and IPCC share the 2007 Nobel peace prize and they were able to join Yasser Arafat and other unlikely winners of this occassionally prestigious award. By the way, try to Google search for gore ipcc.

Saddam Hussein had to wait for four more years to be executed. We will see whether the former vice-president is faster.