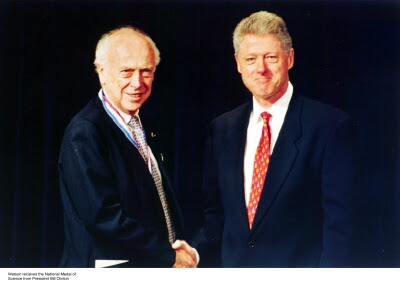 James Watson (click and see the previous story and a video of his talk at Google Inc.) has resigned as the boss (and member of the board) of his laboratories after a bloody attack by the politically correct. He wrote:


Well, exactly. 79+ years is a good enough age to retire but the circumstances are rather unimaginable and certainly unpleasant. It's bad but some people feel super.


Watson also recalls the humane lessons he got from his parents and some fascinating progress in the decoding of the human genome and the cure for cancer that he helped to shape.

Meanwhile, Idang Alibi of Nigeria has written an extremely sophisticated essay in perfect English, supporting Watson's views. How many people such as Idang Alibi there are in Africa? One hundred? One thousand? People who not only want to make Africa better but who can also realistically analyze the history and realize the present reality?
Luboš Motl v 4:49 PM
Share