Click to get a more economical page with the animation.

Is she rotating clockwise or counter-clockwise?

If clockwise, your right hemisphere is more active which makes you oriented towards big picture, fantasy, religion, philosophy, spatial perception, and risk taking.

If counter-clockwise, as most people, your left hemisphere is more active which makes you oriented towards details, logic, words, order and pattern perception, strategy forming, practicality, and safety. 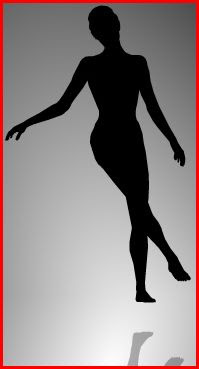 Update: I have changed my mind. The leftists who see her rotating counter-clockwise are clearly deviants. Here's a proof. Look at the two screenshots above. On the left picture, you see that the leg on the right side is shorter than the other one. Why is it shorter? It is because it is more closely aligned with the direction where you look: it goes behind the screen, at least assuming that your eyes are not below the height of her buttocks. It follows that on the left picture, you can't see her face.

On the other hand, you see that both legs are comparably long on the right picture. It is because you can see her face and the flying leg is pointing in front of the screen. The angle between the photons coming from her knees to your eyes and the direction of her leg is almost independent of what leg you choose. This is the interpretation that the clockwise rightwingers offer: the right picture includes her face when colors are added. The leftists have the opposite interpretation - they think that they can see the face on the left picture not the right picture - which is wrong. And the arguments about the (x,y,z) and (x,y,-z) mirror images above don't work once you take perspective into account. If you realize that you're looking at the beauty from a height above her buttocks and it is thus not a parallel projection, the symmetry between the two cases (or between S and S') disappears, the rightists are shown to be correctly evaluating the picture and the leftists are proven, once again, to be a majority (?) of charlatans. ;-)