I just watched nobelprize.org/live.asx. Nice music. The room had thrice as many paintings than what would look normal. ;-)

The winners are Peter Grünberg (Germany) and Albert Fert (France) who discovered giant magnetoresistance, a phenomenon behind hard disks we use today. They have previously shared the 2007 Japan Prize so you can read the standard popular comments there.

It used to be a town in the Protectorate of Bohemia and Moravia. I am afraid he is not in town because we expelled his whole community in 1945. Bad for us but it was their fault! :-) I have already encouraged the mayor to give him an honorary citizenship. Let me pre-emptively assure you that his father wasn't a Gestapo cop but an engineering graduate and they moved to Lauterbach, Hesse, after the war. 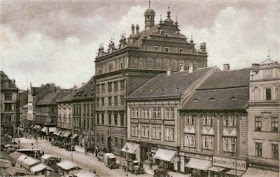 The Square of the Republic, Pilsen, 1940

As we reported in 2006, Thomson Scientific predicted Grünberg and Fart as the second most likely group of winners a year ago but they didn't repeat this precious prediction this year.

They made the discovery independently in 1988: one deals with thin non-magnetic and ferromagnetic alternating layers of film and he observes a rapid decrease of resistance once he turns on the magnetic field and change the mostly anti-ferromagnetic relation between the magnetic layers into a parallel orientation.

iPod hard drives use their physics.

While it is difficult for me to appreciate the purely theoretical value of this discovery, the effect has been used in modern hard drives and MRAM memory chips that makes the practical importance of the discovery pretty indisputable.
Luboš Motl v 11:48 AM
Share