RSS MSU: September 2007 was 7th coolest month in this century

In the last month, the global temperature was just 0.12 Celsius degrees above the long-term average which means that it was 0.78 Celsius degrees cooler than the temperature in April 1998 when the anomaly was +0.9 Celsius degrees. The main reason is La Nina that is getting stronger and might continue to do so for a few months.


The Southern hemisphere was 0.015 Celsius degrees cooler (!) than the long-term average, fifth coldest month since January 2001. Antarctica has cooled down by roughly 1 Fahrenheit degree in the last 50 years. 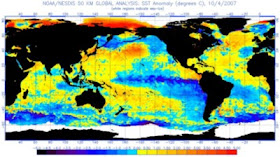 La Nina, i.e. the female baby Jesus (Spanish speakers agree that this is the right translation unless they discriminate against girls by thinking that they can't become baby Jesus!), is famous for the blue (cool) strip in the equatorial Pacific ocean. Because this ocean is pretty big, La Nina typically lowers the global mean temperatures, too. More importantly, it brings distinct patterns of temperature and moisture to different parts of the world.

By the way, in an interview with Dennis Prager, Prof Robert Giegenback who is a geologist at UPenn describes some climate issues from a geological perspective. Among other things, he argues that only during 5% of the last one billion of years, the Earth could support permanent ice on both poles. We're living in one of the coolest periods of the geological history.

Note added later: According to RSS, October 2007 was the 2nd-3rd coldest month in this century so far.

Video 1: An Inconsiderate Troupe: a movie about the last glacier that is melting - a parody to Al Gore's movie for penguins. Incidentally, a climate skeptic, Britney Spears, talks to an alarmist called Paris Hilton. See also Al's and Tipper's Summer Nights.
Luboš Motl v 7:50 AM
Share