Wildfires: due to global warming?

It was inevitable. The terrible fires in California are being used by some people to promote global warming. Scott Pelley of CBS, Michael Oppenheimer at NBC, Barbara Boxer (D-California), and Harry Reid (D-Nevada), Senate majority leader, were the less surprising culprits. CNN moderately predicted a "century of fires". FoxNews may be more surprising but at least they also admit that fires deposit nutrients into the soil.

Meanwhile, Bill O'Reilly II thinks that the fires are part of illegals' reconquista. ;-) More seriously, one of the great fires has already been declared arson!


The whole history of environmentalism is a history of invented simple and scary ad hoc relationships that never work beyond one or two examples - and I could tell you dozens of stories that confirm this general wisdom. The people who promote this stuff don't care that there is no relationship between their scaremongering and reality and that all of their predecessors' previous screams (and, indeed, sometimes even their own screams) have been falsified. Why don't they care? Well, because there exists almost no one who would give them a proper thrashing.

In a more ideal world where survival would depend on getting these relationships correctly, environmentalists and all their allies would have already died away 10 times. But in our world, this garbage is apparently welcome and the shitheads who promote this trash are actually in advantage: it is viewed by many people as a "nice" thing to generate these bogus warnings and to blame the innocent. Like it or not, a garbage ideology trumps the truth.

For example, look at this graph. 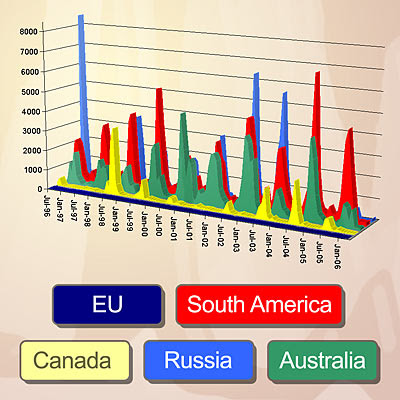 It shows the number of wildfires in various regions of the world between July 1996 and January 2006. First, global warming would predict an increasing trend. There is clearly none: the graph is noise. Second, global warming would predict that warmer years would have more fires than colder ones. But you can see that the hottest year of 1998 had a very small number of fires. The years with the highest numbers of fires such as 1996 or 2003 were pretty cold years or at least, there is simply no detectable correlation here. Even if you invent a more complicated theory with a lag, you won't get a good signal.

Is there a physical basis for expecting that the number of fires would grow? If you think how fires are created, you will have to answer "Yes but the influence is negligible." If you want to start a fire, you need to get extremely high temperatures - temperatures comparable to 100 Celsius degrees or more. Magnifying glasses or very dark and dry species of grasses under the clear skies can help. These are the things that really matter. If you increase the temperature by 0.6 Celsius degrees in a century, it doesn't help much. Such an increase of temperature can slightly change the probability of a fire but many natural causes as well as our increasing ability to detect them or deal with them is surely much more important.

The amount of lies and myths spread in the society will keep on increasing until sufficient regulating mechanisms will emerge. The people who produce this stuff must be intensely attacked. They're very similar to wildfires and nothing else will stop them.