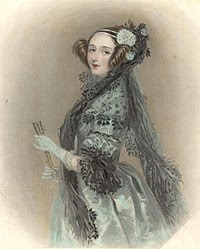 Augusta Ada King née Byron, Countess of Lovelace, died of medicinal bloodletting associated with uterine cancer on November 27th, 1852, at the age of 37. She is considered to be the first programmer in the world.

Her father, the poet Lord Byron, called her "the princess of parallelograms", Charles Babbage called her "the enchantress of numbers", and she was one of the most mathematically gifted women of the history. She wrote the first computer program for the "Analytical Engine", a mechanical computer designed by Charles Babbage that was never built. The program was computing the coefficients of the expansion of the closed string vacuum in string field theory in the Schnabl gauge, the so-called Bernoulli numbers.

Some science historians argue that the program was written by Babbage himself and Ada hasn't really mastered some basic maths but the story in which her contributions were original sounds more sexy. Moreover, I find many champions of this viewpoint untrustworthy. On the other hand, it is also plausible that people like Ada Lovelace contributed to Babbage's design of the computer itself.

Her name "Ada" was used for a programming language created by Pentagon. As a kid, I used to read that the language was very sophisticated but when I saw how it actually looked like, I changed my mind. Microsoft has used her image on its authenticity hologram stickers.
Luboš Motl v 8:20 AM
Share