The Pierre Auger Collaboration has just released their report: 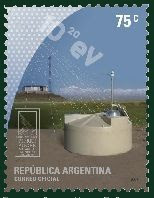 Their detectors in Argentina have recorded a million of cosmic rays since 2004 and 80 of them or so had a really high energy. Note that the cute stamp shows a lot of progress: in 1989, it would be much more likely that a stamp would boast 75 eV of energy and cost 10^20 cents, because of their inflation. Today it's the other way around.

The highest energy of these cosmic rays exceeds 50 billion GeV.

The members of the collaboration claim that these huge energy events must be connected with violent processes associated with black holes.

Note that the energy 1 billion GeV or 1 million TeV or 1 EeV (exaelectronvolt) is literally at the intermediate scale, somewhere in the middle between the current colliders and the Planck scale. We have no chance to produce such a high energy with accelerators that we can imagine today. It is the kinetic energy of a bullet from a rifle concentrated into one elementary particle.

Auger is trying to build additional arrays in Colorado.

The direction of the very high-energy cosmic rays is not random. In all cases, the very high-energy events (white crosses) seem to coincide pretty well with the direction of an active galactic nucleus (AGN, blue dots, and to a lesser extent, green dot) so closely that according to the authors, AGNs are almost certainly the source. We talk about AGNs of rather nearby galaxies. AGNs have black holes in them.

Based on a visual analysis of the picture, I am somewhat unimpressed by this claimed correlation between the directions but their calculation indicates that the hypothesis that the directions are correlated "by chance" is excluded at the 99% confidence level.

The energy of the observed particles denoted by the cross, above 57 EeV or so, exceed the GZK cutoff. Above this limit, cosmic rays - assuming that they are protons or something similar - should rapidly start to interact with photons in the cosmic microwave background and produce pions: such high-energy rays shouldn't get too far. It is almost impossible that their density would be so high that even this exponentially reduced number would give us dozens of events (in a different galaxy!).

I think that it more or less means that these cosmic rays don't interact with photons or they are not elementary or they are not coming from a large distance. Nevertheless, they must surely be subject to the strong interaction (probably) because they interact with nuclei on Earth: the resulting showers are what Auger observes.


Alternatively, of course, one might conjecture that the particles are heavy nuclei if not bullets from a rifle ;-), heavily composite objects. Concerning the last possibility, it is not clear why people from other galaxies would be shooting at us with rifles. ;-)

So there are many question marks and possibilities concerning the apparent GZK paradox. However, even if this paradox is solved in one way or another, we will still not be certain what astrophysical processes or other processes can accelerate particles to such an enormous energy.

For example, if you thought that this high energy is caused by global warming, the required temperature would be over 1 trillion trillion °C. ;-) Of course, the temperature known in any astrophysical object we understand is way smaller.

Well, particles might be hypothetically forced to orbit a black hole and accelerate at the same moment.
Luboš Motl v 8:16 AM
Share