There have been many peer-reviewed or at least published skeptical climatological studies but I didn't have enough time to give you a report. In this weekly dose, C. Loehle in Energy and Environment, vol. 18, No. 7+8, 2007, takes the average of 18 stations: click at "Download file" on that page to receive a PDF file. Also, feel free to download the CSV file for Excel. 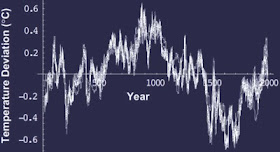 Craig Loehle has eliminated tree ring series from his datasets, explaining that they don't seem to be good temperature proxies. The result is a new kind of a hockey stick, the so-called zig-zag hockey stick. ;-) The new blade in the middle of the stick is called the Medieval Warm Period.

For an audit of Loehle's paper, see McIntyre I, McIntyre II. 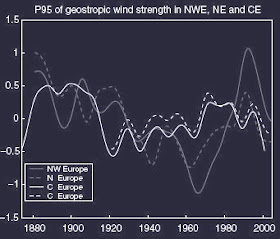 Figure 2: P95 of geostrophic wind strength. For example, the heavy curve that goes back (much more than) 130 years is from Prague-Klementinum and two German-speaking stations.
Luboš Motl v 7:31 AM
Share