Galileo Galilei experimentally realized that all bodies accelerate at the same rate in the gravitational field. This fact was reflected in Newton's equations as the equivalence of the inertial mass (that appears in F=ma) and the gravitational mass (that enters F=G.M.m/r²) of any object. Neither Newton nor classical mechanics had any explanation for this coincidence. 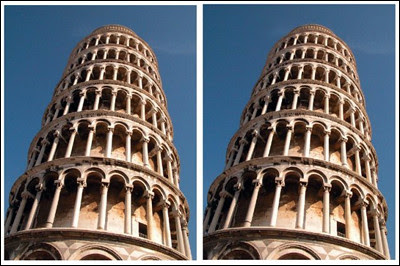 Figure 1: The tower on the right leans more, doesn't it? Actually, it doesn't. The two parts of the picture are identical. ;-)

Einstein thought that this coincidence had to be very important and he has indeed found an explanation. Gravity is caused by spacetime curvature. All objects try to move along the straightest possible trajectories in spacetime which is why all objects accelerate in the same way in the absence of other, non-gravitational forces.

A Western European blogger offers you an introduction to the "Casimir effect" (the title of a recent blog post). According to quantum theory, the electromagnetic field discovered by James Clerk Maxwell and his friends must first be reinterpreted as a collection of harmonic oscillators that are described by the same simple mathematics as a spring.

When you place two parallel conducting plates in space, you force a component of the electric field to vanish at their surfaces. Consequently, only standing waves whose wavelength divides (twice) the distance between the plates are allowed. And only these waves are promoted to harmonic oscillators. That means that we deal with a different (restricted) set of harmonic oscillators. They will therefore contribute a different zero-point energy, too.

If you subtract some infinities properly - for example if you realize that the sum of integers equals -1/12 (in three dimensions, you actually need to know that the sum of third powers of positive integers equals +1/120) - you may not only see that the energy stored in the electromagnetic field depends on the arrangement of the metals but you may also calculate the correct value. Because the energy depends on the distribution of metals, there exists a new force (the gradient of the energy), the Casimir force, which turns out to be attractive.

Dutchman Hendrik Casimir together with Dirk Polder did these calculations in 1948. In 1958, first inaccurate tests occurred but a decent accuracy of experimental tests was only reached in the late 1990s even though no good physicist has ever had any doubts that the effect works as calculated by Casimir.

Many people are shocked by these facts. For example, the Western European physicist asks whether this outrageous new form of energy could also gravitate. You bet.

At the Perimeter Institute, many people employed as physicists like to view quantum mechanics as an unwanted baby, a small correction to their nice classical world, a correction that must be constantly attacked, questioned, and ultimately replaced by something else.

The reality couldn't be more different. Quantum mechanics is no small appendix to some other laws. Quantum mechanics - the same theory that the likes of Lee Smolin deny and hate so much - actually controls this whole Universe without any exception. It just happens that in some circumstances, its conclusions may be approximated by an approximate theory, classical physics, pretty well or very well. But the exact nature of all phenomena in the world always respects quantum mechanics.

Does the Casimir energy influence the gravitational or inertial mass of an object? Yes. Has it been measured? Yes. It hasn't been measured with the same plates that are used in school presentations of the Casimir effect but it has been verified in conceptually equivalent setups. What do I mean?

The Feynman diagram responsible for the Casimir energy - something that also influences the vacuum energy density i.e. the cosmological constant - looks like a photon propagator closed to a circle (loop). Graviton propagators may be connected to this circle if you are interested in the gravitational effects of the Casimir energy. Have diagrams with loops and gravitational external lines ever been tested? You bet. For example, in quantum electrodynamics, even the diagrams with five loops have been tested.

For another example, you may replace photons by gluons. It's conceptually the same thing. The gluon field that exists inside a proton or a neutron also has a kind of Casimir energy that is actually contributing a significant fraction of the nucleon's latent energy. The precise mathematics is more complex and nonlinear but one conclusion still holds. If this contribution to the energy visibly violated the equivalence principle, such a violation would have been seen in all previous tests of the equivalence principle, including those made in the 19th century.

It is not possible to design a theory that would agree with all these accurate tests but that would violate the equivalence principle in an interesting way. Nevertheless, many people are still not getting it. If you look at the article about the Eötvös experiment on Wikipedia, its last paragraphs contains a bizarre statement about violations of the equivalence principle predicted by Einstein-Cartan, teleparallel, and noncommutative theories.

The page about teleparallelism correctly explains that it was just one of Einstein's failed attempts to unify gravity with electromagnetism. On the other hand, the page about the Einstein-Cartan theory tries to present the topic as a subject of cutting-edge research and a theory that cures some "flaws" of general relativity even though its status is analogous to teleparallelism: the theory only has a historical value and has been falsified for quite some time. It is one of those pages used by crackpots to promote their silliness. Equally bizarre are statements about Alain Connes' noncommutative theories predicting parity-sensitive violation of the equivalence principle.

Well, I would recommend all the people who write these things to realize that the state-of-the-art theories we use to describe the Universe really describe everything and all of their components have been verified and measured pretty accurately. If you actually sit down and try to check whether your new theory agrees with all the tests that have been done, be sure that you will falsify your new theory unless your theory has been designed as SM+GR corrected by some small, legal, well-known corrections. String theory is the most distant point where you can deviate - but even string theory may be viewed as a modest update of SM+GR.

No "immodest" deviation from SM+GR can ever revolutionize physics simply because SM+GR have already been established. All proposed theories except for the marginal case of string theory that deviate from SM+GR in a visible way - that strongly reject a basic principle or add a new field with reasonable finite couplings or anything like that - can be almost instantly falsified. Whoever thinks that it is possible to brutally modify physics without destroying its validity is a victim of the same confusion as a Latvian critic of physics who calmly jumps from the window of a skyscraper, convinced that the laws of gravity hasn't yet been tested for Latvian critics of physics.

Well, if someone is very rich, he can waste hundreds of millions of dollars for expensive experiments that will verify something that has already been verified in much cheaper and smarter experiments. I wouldn't recommend anyone to do so. Also, this debate is another example of the strong predictive power of string theory. String theory gives the same conclusions as normal general relativity - the equivalence principle holds - but this conclusion plays a different role. In general relativity, it is one of the postulates. However, in string theory, it is a derived fact.

String theory allows us to understand a deeper origin of the concepts that appear at the previous layers of our understanding of the Cosmos which makes it possible to distinguish which properties of the previous theories are just coincidences that don't have to be accurately true and which of them are principles that will survive.

So string theory not only leads us to new ideas and phenomenological scenarios that usually turn out to be viable but it also protects us against attempts that are wrong or meaningless. It implies that all conclusions that deviate from the standard wisdom of quantum field theory and general relativity in a dramatic way have to be wrong. This prediction of string theory that certain principles - such as the postulates of quantum mechanics, the equivalence principle, or the local Lorentz symmetry - are far more robust than some people might think has so far been confirmed in all tests. And believe me, it will continue to be so in the future.