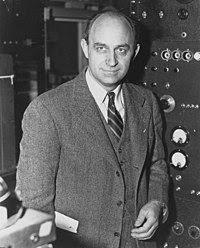 Enrico Fermi (9/29/1901 in Rome, Italy - 11/28/1954 because of stomach cancer) was most likely the second most important Italian physicist after Galileo Galilei (check this list).

When he was 17 and he was entering the college in Pisa, he wrote an essay about a Fourier-series analysis of solutions to the partial differential equation describing... waves on a string. The examiner interviewed Fermi and determined that the essay would have been good enough for a PhD in Pisa.

The young 25-year-old professor did his most important purely theoretical work in fundamental physics in 1926 when he wrote the paper about the Fermi-Dirac statistics. The rest of his research life was dedicated to radioactivity. In 1938, right after the war started, he was wittily given a Nobel prize for induced radioactivity. ;-) But he was just getting started.

Did everyone accept Fermi's statements from the very beginning? You may guess what the answer is with these great minds. When he submitted his famous paper on beta decay to Nature, the editor rejected it because "it contained speculations which were too remote from reality". This is what the lagging, inferior minds say about cutting-edge research in theoretical physics in most cases, even today. The paper using the new term "neutrino" that Fermi invented (but Pauli got the idea in 1931) was therefore published in German and Italian before it appeared in English.

As Wikipedia argues, he never forgot this experience of being ahead of his time. His protégés were therefore told "to never be first; to try to be second". James DNA Watson was preaching pretty much the same thing to his protégés.

Nature eventually published his report on beta decay in January 1939. Once he left Italy for Columbia University at the very same time, in order to save his Jewish wife, he reproduced some other people's fission experiments. Fermi moved to Chicago where he built the first nuclear pile, a primitive nuclear reactor that went critical in December 1942 in a "squash court"; Russians translated the location as "pumpkin field". :-) Every step was carefully and brilliantly planned.

This wisdom and experiments were also useful during the Manhattan project in which Fermi, who became a U.S. citizen in 1944, assisted. When you summarize his work on nuclear technology, you will see that Fermi was the most practically talented man among the great 20th century theoretical physicists and the impact of his work makes the comments about his work being detached from reality doubly ludicrous.

He had to think, write, and do a lot to realize all his achievements associated with nuclear physics. But if we measure the impact on public's perception of scientifically loaded questions per word, his most influential results are three words from the 1950s: "Where are they?" The Fermi "paradox" shows that it is rather unlikely for the Universe to be filled with too many very advanced civilizations.

I have talked to a student of Fermi. She admired him and she was certainly not the only one.
Luboš Motl v 7:51 AM
Share