Max dislikes this ad. What do I think about this ad?

Well, I think that unfortunately, it is an honest description of the present reality. The father is a normal person who apparently bought the 2008 Ford Escape hybrid SUV simply because it is the most fuel-efficient SUV in the world.

His daughter wants to be dropped a few blocks away from her final destination, a theater. Why? Because she is ashamed to use a normal car, especially her dad's SUV. She explains that the whole part of the town around the theater actually uses hybrids and bikes. That's how her friends choose their friends. That must be a really interesting town if it has such neighborhoods.


Her father tells her that their car is a hybrid. She seems stunned even though the word "hybrid" is clearly written on the rear side of the car (look when she opens the door). "Do you mean a hybrid hybrid?" Well, I don't know what a hybrid hybrid means, he says, but yes. "Why didn't you tell me it was a hybrid?" Well, her father didn't find it necessary to shout that he is driving a hybrid because it is not such a big deal. I suppose that the Ford Motor Company doesn't find it appropriate to shout and brag either.

The father is smiling a bit while the daughter seems really unpleasant to me: she directs the discussions as if it were an interview with KGB. Nevertheless, it seems that the commercial tries to paint the father as the losing side, morally speaking. The genuinely concerned daughter is apparently forced by her teachers (or classmates?) to impose strict environmental rules at home. She is led to be ashamed of her father because he is not like one of those fathers from that "part of the town". It just happens that she learns that she has no reason.

Except for the bragging. Should fathers be explaining their small daughters what kind of motors their cars have? It is extremely likely that she couldn't follow it. So should people talk about hybrids because it is fashionable? Driving hybrids is not so environmentally friendly, after all. This one has 34 miles per gallon. She should have used mass transportation or a bike if she is so concerned.

Finally, let us ask. Is the commercial effective? I morally support the father who probably represents the whole company. But what is so amazing about a commercial that essentially says that your car is not such a big deal? Is it supposed to increase the sales? Does the company really believe that even the fathers who buy the cars are deciding according to sentiments in some bizarre "parts of the town"? 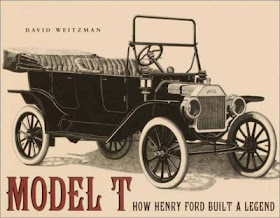 I am probably too old-fashioned but those simple old ads paid for by Henry Ford were more meaningful than the recent ads building on psychological intimidation and political correctness. People buy cars and should buy them because they are powerful, fast, cheap, efficient, pretty, and because they have other good objective features, not because they are politically correct in a "part of the town". It's very bad if the people in car companies don't get it.

Also, if Ford wanted to offer a model that would be bought by similar hypocritical jerks as some of those who buy Prii (which I suppose is plural of Prius) because it is politically correct, my opinion is that they have failed, too. The advertisement is just not sufficiently "politically correct" to become a symbol of those people. To summarize, I don't know who is the target audience and I think it is sad that this is how the thinking about products and commercials start to look like.

But one more link here: GM, Ford, and Toyota answer whether they plan to produce flying cars. They seem skeptical. Maybe they should hire this 12-year-old Korean string theorist.