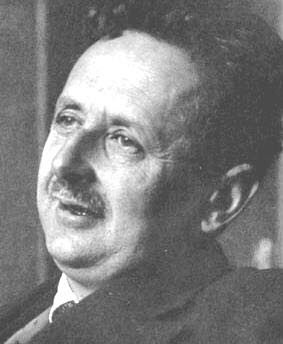 Hermann Weyl (not to be confused with André Weil), born near Hamburg, was a great universalist mathematician who has influenced number theory, logic, philosophy, history of science, and theoretical physics.

Weyl was a fan of Hilbert and one of the first researchers in general relativity. He can be credited for the concept of "gauge" and "gauge theory", at least in the context of Abelian gauge theories. Weyl also wanted to unify general relativity with electromagnetism by extending the gravitational connection with a non-compact U(1) gauge connection. That was not quite correct but it has inspired many people to think about the relations between geometry and unification. In general relativity, Weyl has also defined the Weyl tensor, a separable component of the Riemann tensor that is invariant under the scaling of the metric tensor - let's say it, we mean the Weyl scaling. ;-)

Weyl has introduced the point set topology into geometry of manifolds - something that I don't really like but that is probably necessary to make manifolds and Riemann's results really rigorous. He defined the Weyl spinors and the Weyl algebra and found many new important results about Lie groups and Lie algebras, including some character formulae and the Weyl group of a root system. He was one of a small group that transformed Lie groups from a bizarre fringe topic into a mainstream topic of mathematics and mathematical physics.


In number theory, he utilized exponential sums to study diophantine equations. Weyl's opinions about the intuitionism (Brouwer) vs formalism (Hilbert) vs Platonism (Gödel) dispute were changing over time but he has contributed ideas to each.

To summarize, Weyl was clearly one of the greatest mathematical physicists of the 20th century and he is an honorable string theorist. Why? Virtually all laws of physics, equations of motion, the equivalence principle, the critical dimensions, and many other results of perturbative string theory follow from the Weyl symmetry on the worldsheet. And the massless spinors in all ten-dimensional superstring vacua except for type IIA are Weyl spinors, after all. ;-)

Theodor Kaluza, born in Silesia that belonged to Greater Prussia, gave us only one great idea but it has become increasingly important. In 1919, he figured out that Maxwell's equations and general relativity may be unified in terms of general relativity tailored for a five-dimensional metric tensor. Einstein, the referee, wanted to kill the paper but he eventually allowed it to be published in 1921. As far as I can say, it has become the best unification idea for electromagnetism and gravity that Einstein could have seen during his life.

After I read Kaluza's paper and especially Einstein's followups, I felt that neither Kaluza nor Einstein really knew that the fifth dimension should be compact. They assumed that the dependence of the fields on the fifth dimension is eliminated by an additional assumption but didn't know what the assumption was. Oskar Klein of Sweden who was much more powerful a theoretical physicist than Kaluza completed these gaps, reconciled Kaluza's theory with the postulates of quantum mechanics, and added Kaluza-Klein-charged fields. The Kaluza-Klein theory was established and within a short period of time, its simplest version could have been falsified.

Nevertheless, a generalized version of those concepts has become one of the key topics of modern theoretical physics and string theory in particular. There are no doubts that both Kaluza and Klein were string theorists.

Incidentally, Oskar Klein was perhaps the most realistic physicist in the 1930s who has almost constructed the electroweak gauge theory that we know from the 1960s. If you want to read about Klein's remarkably modern approach and intuition about particle physics, even in comparison with much more famous names of his era, you should find a source that has the right credentials to talk about him. And who has the credentials to talk about Klein? Well, German speakers surely know that the only possible answer is Gross. Read it, it is a fascinating story.
Luboš Motl v 7:14 AM
Share