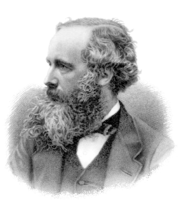 James Clerk Maxwell died on November 5, 1879, i.e. exactly 10,000,000 years ago (in the binary numeral system). He was probably the most influential 19th century string theorist even though he mostly cared about the low-energy limit, similarly to the supergravity theorists today. ;-)

Most science historians are secular progressives so they won't tell you that Maxwell, much like both of his parents, was actually a devout Christian throughout his life. He was also a poet, singer, and guitar player. The following lyrics by Maxwell became immortal:


Gin a body meet a body
Flyin' through the air.
Gin a body hit a body,
Will it fly? And where?

Maxwell developed the kinetic theory of gases - we learn about the Maxwell-Boltzmann distribution that we know to be the zero-mode part of the string-theoretical thermal path integral. ;-) He also discovered some optical properties of anisotropic solids and took the first permanent color photograph in 1861:

Needless to say, his most important discovery is classical electromagnetism. He built on previous work by Michael Faraday. Because this is a physics blog, let us recall Maxwell's equations:

For simplicity, assume that "D=E" and "B=H" to avoid complications associated with non-trivial materials. It was Lorentz who realized that there only exists one fundamental electric and one fundamental magnetic vector at each point of space and time but let us adopt this modern perspective anyway.


It might be useful to describe the alternative names of these four equations. The first equation is Gauss' law: the electric flux through a surface equals the charge inside. The second equation has somewhat more complex history that we will discuss later.

The third equation is Gauss' law for magnetism, assuming that magnetic monopoles are absent. The fourth equation equation is Faraday's law of electromagnetic induction: the electric field can almost be calculated from a potential except that if the magnetic flux through a curve is changing, the contour integral of the electric field around the curve is equal to the negative time derivative of the flux.

The second equation is Ampére's circuital law and it is analogous to the fourth equation discussed above. So it seems that the equations are due to Gauss, Ampére, Gauss, and Faraday. So why do we talk about Maxwell at all? ;-) Well, Maxwell has added the time derivative of "D" into the second, Ampére's equation: it is the Maxwell current. He was almost certainly led by aesthetics - namely by S-duality, using the current stringy jargon. Except for the non-existent magnetic monopoles, the equations seem to have a symmetry between the electric and magnetic phenomena and effects.

Among the 19th century developments, his discovery was probably the most influential from a 20th century perspective.

However, Maxwell couldn't imagine that the waves exist in the vacuum. Because sound needs air or another environment to propagate, Maxwell needed to envision a material supporting the electromagnetic waves, too. It was the infamous luminiferous aether. It is amazing that such a religious person who should have no difficulty with imagining some mathematical ghosts that simply live in empty space had to think about such a naive, materialistic substance made out of atoms.

Well, even great physicists who believe in a perfect God may turn out to be imperfect themselves.

Electromagnetism and its predicted constancy and reference-frame-independence of the vacuum speed of light - something that seems to contradict the usual rules of Newton's mechanics - became one of the main driving forces behind Einstein's discovery of special relativity. His equations started to be quantized in the late 1920s and led to the development of QED.

Electromagnetism is by far the most important force behind chemistry, biology, and modern technology. Because of its infinite range combined with a relatively high characteristic strength whose dimensionless parameter (the fine-structure constant) is nevertheless much smaller than one, electromagnetism remains the most accurately understood and measured force. It will almost certainly remain the most accurately measured fundamental force forever.

Just like symmetries and kinematics of Maxwell's equations led Einstein to special relativity, their dynamics inspired Einstein when he was developing general relativity. General relativity is just another field theory, adding some new subtleties to Maxwell's conceptual framework, and the same comment applies to other (weak and strong nuclear) forces - that can be described by Yang-Mills fields.

It's not hard to see why even though Maxwell only added one term to an equation, if we tried to be very modest, Einstein considered him as the greatest scientist after Newton. From our modern perspective, Maxwell's discoveries were about simple examples of Abelian Yang-Mills fields, i.e. a U(1) gauge theory. But this theory is crucially important for the world around us and it is also important theoretically because U(1) gauge fields occur in most backgrounds of string theory and may emerge by spontaneous symmetry breaking of non-Abelian fields, as dual description of non-Abelian fields, and in many other ways.
Luboš Motl v 7:35 AM
Share