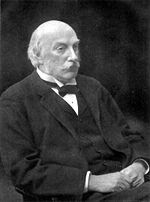 John William Strutt, 3rd Baron Rayleigh, was born on November 12th, 1842. Even though this white male aristocrat ;-) received his 1904 Nobel prize for the discovery of argon and geologists know him for Rayleigh-Lamb waves, most physicists would almost certainly think of the Rayleigh scattering.

This scattering is the main reason why the sky is blue: short-wavelength electromagnetic waves (e.g. blue photons) are scattered much more strongly which is why they arrive from random directions of the sky rather than the Sun. Rayleigh scattering is a good description when the impurities are much smaller than the wavelength of the light. Their calculable effect on radiation increases with the fourth power of the frequency.

This is probably not the best example but believe me - the sky is usually blue.

Two students of Lord Rayleigh were called Thomson and both of them were great physicists who won a Nobel prize. J.J. Thomson discovered isotopes, the mass spectrometer, and especially the electron for which he received the 1906 prize. George Paget Thomson shared the 1937 prize with Clinton Davisson for their observation of electron diffraction, a major experimental pillar of wave mechanics. If you want to be sure that the world of great physicists was really small, notice that George Paget Thomson was a son of J.J. Thomson. ;-)