Most Germans are Celts

The Google News are now available in Czech:

I am convinced that Google News are better than any individual source of news. And there are many special news in the Czech edition, too. 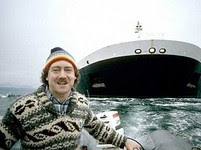 For example, we learn that Patrick Moore, a co-father of Greenpeace, met with President Klaus to support nuclear energy, industrial consumption of wood, genetically modified crops, chemical compounds protecting people against fires, industrial production of salmons, and our fight against the global warming religion.

This is how a true environmentalist should look like. The present generation should treat Patrick Moore as their role model. Incidentally, Patrick Moore was immensely influenced - and led to the green movement - by a Czech scientist and politician named Mr Vladimír Krajina (1905-1993) who emigrated to Canada in 1948. If you care, the word "Krajina" means "landscape". ;-)

According to a DNA analysis of 19,457 people made by Igenea, Zurich-based genetics corporation, only 6 percent of German males have inherited Germanic genes from their fathers (including the Y chromosome). German women are way more Germanic: about 50 percent of the German people have inherited Germanic genes from their mothers. The inflow of non-Germanic male genes is explained by premature deaths of German men during wars when they had to be replaced by newcomers. ;-)

This DNA chaos has affected other European nations, too. According to Genomac, a Czech company, only 50 percent of genes of the Czechs who live today are Slavic. About one quarter of the Czechs come from Romanic countries and 10 percent of us may boast Germanic or Scandinavian origin. Most likely, Celtic roots are also heavily represented even though Genomac surprisingly didn't include Celts as a basis vector at all.
Luboš Motl v 2:30 PM
Share