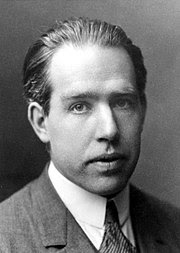 Niels Bohr died on November 18th, 1962. Like most great 20th century theoretical physicists, this Danish physicist was a Jew.

While Bohr received his Nobel prize in 1922 for his old model of the Hydrogen atom - with ad hoc discretized Kepler orbits for electrons - that was superseded a few years after he was awarded the prize, it might be true that Bohr's role as a spiritual leader of the quantum community was more important.

Bohr is the father of the complementarity principle in quantum mechanics - something that only differs from the uncertainty principle by a different handwaving. And he became the ultimate lawmaker who codified the Copenhagen interpretation of quantum mechanics. As a boss, it was both his responsibility as well as pleasure to debate leading misguided contrarians, particularly Albert Einstein. He had to invent a lot of wise quotes, too.

Werner Heisenberg was his pupil. Their intellectual relationships were very intense and were only destroyed once the two great minds appeared in two different competing teams that were trying to create a nuclear weapon. Bohr was on the good side that eventually became the winning one, too.
Luboš Motl v 5:33 PM
Share