RSS MSU: October 2007 was 2nd coolest month in this century

According to the latest RSS MSU satellite data for the lower troposphere, October 2007 was globally the 2nd or 3rd coldest month among the 82 months since January 2001. July 2004 remains the coolest month because the anomaly was 0.053 Celsius degrees.

May 2007 and October 2007 share the silver and bronze medals with the anomaly of 0.091 Celsius degrees which is 0.81 Celsius degrees cooler than the warmest RSS month, April 1998. Using Al Gore's terminology, two of the three coldest months in this century have occurred in this year! ;-) 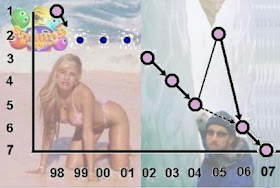 The cool global temperature was primarily influenced by the equatorial zone that has experienced a strengthening La Nina. The interval between the latitudes -20 and +20 saw the coldest month since June 2000.

Unless the average temperature anomaly in November and December jumps well above 0.4 Celsius degrees which seems rather unlikely, 2007 will become the coldest recorded year in the 21st century so far according to the RSS MSU data. Just a note for friends from NewsBusters.org: it is set to be the coldest year among 7 years since 2001, not coldest year in 100 years. ;-)