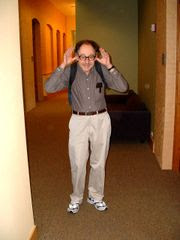 Very sadly, Sidney Coleman died on Sunday morning. In sleep. Apparently peacefully. Arthur Jaffe's e-mail is here and there is an obituary in Chicago Tribune and Harvard Gazette.

In 2005, Arthur Jaffe and Barbara Drauschke organized Sidneyfest (official WWW) to celebrate Sidney's life achievements, his sense of humor, and his friendship.

Sidney was a physicist's physicist. He has been an excellent teacher, simplifier, expositor. His lectures at Harvard on quantum field theory were legendary and his notes were used by many of his successors including your humble correspondent for years. See the TeX edition of these notes and an earlier proposed Sidney Coleman Open Source Project. Many physicists have his Aspects of Symmetry with selected Erice lectures on their bookshelves.

With Abdus Salam, 1991 (taken from a today's article about crackpot Lisi)

But of course he has found some precious results, too. The Coleman-Mandula theorem showed that many superficially plausible ways to unify physics in the 1960s were guaranteed to be on the wrong track. Some people haven't understood the power of the theorem to day.

The Coleman theorem proves that one cannot spontaneously break continuous symmetries in two dimensions or below. The Coleman-Weinberg potential pioneered loop corrections to the vacuum energy that can also induce new phase transitions. Coleman also found that the Thirring model was equivalent to the sine-Gordon model. He is the main physicist behind our understanding of the fate of false, unstable vacua. Add tadpoles (i.e. spermions), thin-wall Q-balls, many other papers about symmetry breaking, confinement, black holes, wormholes, parameterizing Lorentz symmetry breaking with Glashow... it's a lot of stuff.


I took the picture (960 x 1280) that is used at Wikipedia and all of its mirrors but that was one of a very small number of opportunities to meet him. Coleman will be missed...

My deep sympathies to Diana and his friends. Finally, I guess that Sidney wouldn't endorse overly depressed reactions, so here is a quote by Sidney describing his role in the physics community (hat tip: Betsy):

If I have seen further than others, it is because I was standing in between the shoulders of dwarves.