Telegraph: Cosmologists are killing the Universe

Steve Heston has posted a comment telling us that

argues that "mankind is shortening the universe's life" by observing the cosmological constant, bringing us closer to the doom. As soon as I saw his message, I would have accepted a 10:1 bet that the author had to be Roger Highfield because it is very unlikely that there exist two or more breathtakingly unreasonable people of this magnitude in the Telegraph. Of course, I would have won the bet.

Roger Highfield has already "informed" his readers that Einstein may have started the rot (the word "rot" means modern theoretical physics) and that Garrett Lisi has found a theory of everything. 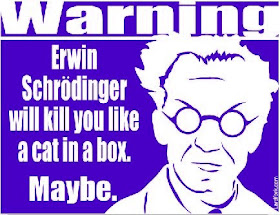 These "scientists" offer far too many basic misunderstandings of cosmology and quantum mechanics to discuss all of them. For example, without a glimpse of a rational reason and in contradiction with all existing theories and scenarios, anthropic or otherwise, they proclaim the typical lifetime of our Universe to be comparable to the Hubble time.


More seriously, they argue that by observing the cosmological constant, we have "reset the cosmic clock" which means that the Universe can no longer have a bright future. Their "reasoning" is wrong at every level you can imagine. This religious idea is based on a complete and rudimentary misunderstanding of the measurement theory in particular and the interpretation of quantum mechanics in general.

The fictitious event of "resetting the clock" or "collapse of the wave function" or anything like that is certainly not associated with our decision to interpret some macroscopic observations as a vacuum energy: it is an inseparable consequence of the interactions of macroscopic systems with their environment.

The expansion of this Universe has been accelerating for billions of years before there were any humans around. Even though it was rather hard for us to measure this acceleration, this acceleration has influenced billions of processes in the Universe and was imprinted into detailed properties and trillions of degrees of freedom of many macroscopic systems in the Cosmos. Whether a conscious or intelligent being is ready to interpret some observations in one way or another has no impact whatsoever on the correctly calculated probabilities of different outcomes in the future.

I wonder whether experimental cosmologists start to be executed as a threat for life in this Universe. Will the U.N. boss Ban Ki-moonbat propose this step to save our Universe? As Steve correctly says, this alarm looks much worse than global warming! You can see where the tolerance towards crackpots leads. Because writers such as Mr Highfield haven't faced the appropriate consequences, he - and others - will be writing increasingly more outrageous BS into his newspaper and other sources.

Now, when you have finished reading this article, please use a quantum eraser to undo the decoherence so that you don't contribute to the decay of our Universe! ;-)
Luboš Motl v 6:42 PM
Share