Loehle's article was the first published climate reconstruction that has only used proxies that had already been independently calibrated in peer-reviewed literature. It has eliminated tree rings because they don't seem to be good temperature proxies: it seems that the growth of trees is more affected by humidity, precipitation, and directly by the concentration of carbon dioxide, the food for trees. The main result of Loehle's paper was that the Medieval Warm Period did exist, after all.


As far as I can say, Gavin Schmidt learned these principles from McKitrick & McIntyre and other independent climate experts because they have been carefully checking these things in the context of older climate reconstructions such as the infamous Mann et al. hockey-stick reconstructions for quite some time.

If you remember Richard Feynman's "Cargo Cult Science", he talked about the sloppy experiments with the rats running through labyrinths. Later, a guy called Young actually made some careful experiments and found what kind of information the rats actually use. He therefore found the rules that one must respect in order to find anything new about the rats. Young's work was ignored by the rat pseudoscientific establishment in the 1930s. Needless to say, the generic rat scientists play the same role as Mann et al., Young is McIntyre, and the issues one must be careful about are mentioned above.

Many people hold the mistaken belief that reconstructions of past climate are the sole evidence for current and future climate change.

His suggestion that climate reconstructions may be completely avoided is, of course, untrue because of the point "5. Validation". The very existence of climate change is a tautology and you don't need any special methods to say that climate is changing and will be changing. But if you want to say anything beyond this tautology - how much it will change and what factors may influence it - you can't live without climate reconstructions.

It is because every theory or model in science must be validated and the validation must ultimately involve a comparison to reality. If a theory predicts how the temperature will change at the centennial scale, it is simply inevitable to have some data about the centennial changes of the temperature. Because of the arrow of time ;-), we can only have such data from the past.

In order to figure out whether the 20th century warming was outside the natural variability, you may create a lot of theories but you won't know whether the theories are true and accurate - or whether you have missed some additional low-frequency processes - until you will compare their description of the past climate with the corresponding information extracted from the history of Earth, at least in some of its aspects. Think about it: it simply can't work otherwise, especially because we know that the partially unknown natural causes are stronger than the man-made causes, at least for 30-year-long periods (such as the 1945-1975 cooling).

Now, I am the last one who would think that it is essential to know whether the year 1005 was warmer than 2005. These are two relatively warm years and which of them was warmer is pretty much a matter of chance. If 2005 were warmer than 1005, it is still far from a reason to panic. On the other hand, if we can show that 1005 were warmer or 1005 and 2005 were very close, it shows that the recent temperatures are not unprecedented but it still doesn't quite guarantee that all temperatures in the future will be safe. At any rate, it would be foolish to build global policies on a random question whether 1005 was warmer than 2005. On the other hand, you can't throw away all the data from the centennial paleoclimate reconstructions because they are the only empirical source that tells you which effects actually matter in reality at this timescale.

It is a standard policy at RealClimate.ORG that the authors of the articles don't offer the criticized article itself to their undemanding readers. Gavin's recent text is an exception - a link to Loehle's paper was later added to Gavin's article but it is still difficult to find it. What's important for the readers is not to learn something or compare arguments for various statements and their robustness. Instead, what they expect is their daily prayer, Oh the global warming, you're so great and holy, and oh the climate skeptics and the climate traitors, they are oh so evil. Gavin Schmidt and others are optimized to write this inexpensive material for this kind of people.

Gavin tries to indicate that Loehle makes errors in all the five issues mentioned at the beginning. Unfortunately, his criticism is somewhat vague and in the cases when it is not vague and where I could try to check his statements, they seem to be demonstrably wrong.

So for example, we learn that Craig Loehle has confused the symbols "BP" and "BP (2000)". The former symbol means "before the year 1950" while the latter means "before the year 2000". I don't see any trustworthy evidence for this accusation by Gavin. If you go to the first sentence and download the PDF file with Loehle's paper, you may check that the paper doesn't use any of these "BP" symbols at all. This symbol should only be used for very long timescales, not timescales comparable to centuries, anyway. Moreover, Craig Loehle has thanked the very same Eric Swanson for finding dating errors as Gavin Schmidt.

I just find it unlikely that Loehle's paper contains these well-defined dating errors that Gavin could find so easily but express so vaguely. And frankly speaking, whether the warmest years of the medieval warm period occurred around 930 AD or 980 AD is not such a big deal anyway. Such a possible error can't be compared with a fabricated shape of a hockey stick, can it?

Some of the other statements by Gavin seem even more obviously incorrect. For example, Schmidt writes that the proxy Loehle #12 is also off by 50 years (???) but this proxy shouldn't have appeared at all because it only starts in the year 1440. If you actually look what the proxy is, it is from the paper Calvo, Grimalt, Jansen (2002). Click at the link and read at least the abstract. You will see that these authors don't go 550 years into the past but as much as 8,500 years into the past: "ka" means a "kiloannum", 1,000 years. This is what some of the cores from the seas are normally used for. As far as I can say, what Schmidt writes is a downright lie and he relies on the assumption that no one will be searching for the actual papers and check his statements. Preventively, he didn't link to the paper by Calvo et al. either.

There might be some legitimate criticism in Gavin's text but I couldn't find any. The comparison of Gavin Schmidt and Steve McIntyre as "auditors" couldn't be more startling. While McIntyre always analyzes the finest detail of the reconstructions, he reruns all relevant programs (and does some reverse engineering when necessary), Schmidt builds on superficial, Woit-like defamations and pseudocriticism that he often makes up in which he doesn't even link to the relevant papers or sources because he probably knows himself that what he writes is not true and it only designed to manipulate with gullible readers.

If you realize that charlatans such as Gavin Schmidt are paid for their work while Steve McIntyre must work as an outsider, the state of affairs in the present climate science seems sad, indeed.

Loehle's paper has also been criticized because he didn't specify any error bars. Now, I obviously agree that it is better to specify errors bars if you can. On the other hand, detailed audit of older papers about these topics has demonstrated that the error bars in most paleoclimate papers are more or less unjustifiable numbers that are either determined by incorrect calculations or by randomly chosen Bayesian priors. If the only error bars one can determine are of this kind, I think it is better not to calculate any error bars at all. 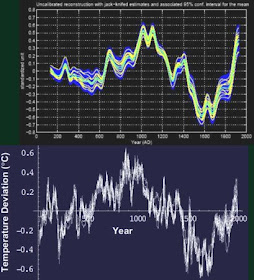 Figure 1: Moberg 2005 (up) compared with Loehle 2007 (down). While Moberg is viewed as a "mainstream" scientist, Loehle is being sold as a skeptic. However, if you look at the figure above, you may see that their reconstructions are almost identical. This is of course partly because they use similar sources of data. But it is very conceivable that paleoclimate reconstructions will eventually converge to charts similar to those above - or other charts that someone will draw in the future. In one of them, the medieval warm period may win and be warmer than out times, in the other reconstruction, it may be the other way around. But you can easily see that the actual difference is small. I am unimpressed by the people who oversell the difference between the two graphs - on either side of the global warming debate.

The graphs above substantially differ from some older reconstructions that are thought to be very inaccurate these days (especially because the graphs above show much greater natural variability) but I do think that at a certain moment, the reconstruction business can only do progress when methodologies and proxies compete and scientists propose their positive work and remove errors that were identified as important ones, one by one. In this sense, I disagree with Steve McIntyre who celebrates that Gavin Schmidt has joined the international coalition of auditors. Nevertheless, if you're interested in audits of these papers, you should definitely read what Steve McIntyre has to say.

But it would be even more constructive to try to use your criticism to create a better reconstruction than Moberg and Loehle. No reconstruction will ever be perfect but the goal should be to reduce methodological errors and keep on increasing the accuracy. It was very important for someone - M&M - to point out some of the popular mistakes in the reconstruction but we should eventually assume that the top paleoclimatologists have had the opportunity to learn their lesson and they should be allowed to return to positive work. Every proxy or method that people can use involves a certain tension with one or more points in the list of 5 issues from the beginning of this article. The real difficult question is how to optimally overcome them to learn as much as possible.