This weekly dose of peer-reviewed skeptical literature about the climate will be rather short because we have talked about similar issues many times. In the International Journal of Climatology,

show, in their article "A comparison of tropical temperature trends with model predictions", that the previously discussed "fingerprint" predicted by 22 greenhouse-dominated models disagrees with the observed data summarized in 10 datasets. 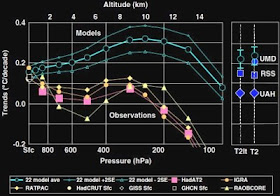 Figure 1: Models said "Good bye" to reality. At the key altitudes, reality is about 6 uncertainties of the mean (measured as the standard deviation of the model ensemble divided by the square root of 22-1) away from the models. If you include "submodels" or "realizations", there are 67 of them and the discrepancy jumps to 10 sigma (this is why copying a model many times, as in the "consensus science", will be used against you by the rules of science). If you count the discrepancy in the experimental standard deviations, they will exceed 5 sigma, too. Regardless of these numbers, the picture above says a lot by itself.

The models and observations are compatible near the surface. However, about 5 kilometers above the surface (where the greenhouse effects starts to become relevant) in the tropical zones, models predict between 2 times and 4 times higher warming trend than what is observed. Above the altitude of 8 kilometers, the theoretical and empirical trends have opposite signs.

The insights strongly indicate that the true mechanisms driving the changes of temperature are not understood and the overall effect of greenhouses gases is being overestimated - between 2 times and 4 times - by all existing models. Note that with this reduction, IPCC's sensitivity between 2 and 4.5 °C gets reduced to the standard 1 °C climate sensitivity which means that the additional greenhouse-induced warming by 2090 will be less than 0.5 °C.
Luboš Motl v 8:44 AM
Share