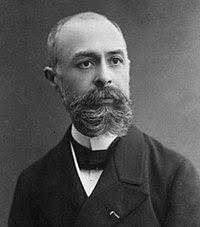 Antoine Henri Becquerel was born on December 15th, 1852. How did he become famous? Well, in 1896, he was verifying Röntgen X-ray experiments and studied fluorescence, too. So he wrapped a fluorescent substance (potassium uranyl sulfate) in thick black paper that was inserted in photographic plates. And he saw images of the fluorescent material and the Maltese Cross (and later coins) on the photographic plates: see the picture below. It followed that there had to be a spontaneously emitted radiation that can penetrate the black paper.

Radioactivity was born - one of two Lord Kelvin's dark clouds floating above classical physics. These were times when making important discoveries in physics was rather easy. Becquerel received the 1903 physics Nobel prize.


Physics has made substantial progress since 1896. What he observed is no longer just some mysterious structureless radiation. We know alpha-, beta-, and gamma- radiation, dominated by the strong nuclear, weak nuclear, and electromagnetic interactions, respectively. The gravity radiation has not yet been measured, not even at the classical level, as the previous posting explains. Each of the three observed types of radiation has been described by a very specific, crisp but mathematically profound gauge theory and we seem to know how two of these theories must be unified and all three of them might be unified.

It's been 49 years since the death of Wolfgang Pauli.
Luboš Motl v 12:32 PM
Share