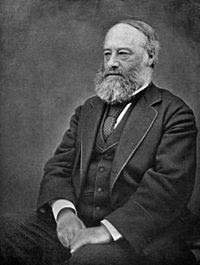 It's Christmas Eve which doesn't mean that physicists are not born. We will talk about two famous people born on Christmas, namely Jesus Christ and James Joule. ;-)

About 2008-2013 years ago, Virgin Mary talked to archangel Gabriel, a boss of God's P.R. department. It is believed it was on March 25th. She remained a virgin legally. Nevertheless, the annunciation has also served as conception biologically. Atheist scholars often argue that Christmas is celebrated around December 25th because Christianity wanted to absorb the Roman cult of the unconquered Sun (Sol Invictus), a paganic holiday celebrating a sun god and introduced by Aurelian, a Roman emperor, in his attempt to establish a new imperial religion.

However, Benedict XVI, the current Pope, offers a different theory explaining December 25th. He starts with March 25th, the date of conception that he represents as a figure from the new Gregorian calender, and adds 9 months. Roman emperors are thus completely eliminated in his approach. You might protest that one unknown number is calculated from another unknown number. But don't forget that the Annunciation is God's revelation that can be used as legitimate input of all your calculations. You might also object that pregnancy didn't have to last exactly for 9 months. But this objection can also be resolved: the Pope said it was exactly 9 months and the Pope is infallible. ;-)

Commercial: Queen Elizabeth revealed her new YouTube channel. She shows a 50-year-old groundbreaking TV speech in which she criticized various crackpots and haters.

From Jesus to Joule

James Prescott Joule (12/24/1818 - 10/11/1889) was born as the son of a rich brewer. He was tutored at home - except for a short course that James Joule and his brother Benjamin received from John Dalton who had to retire soon because of a stroke. Nevertheless, arithmetics and geometry taught by Dalton impressed James Joule tremendously. He was intrigued by electricity, too.


Anyway, he became a manager of the brewery. Science was Joule's hobby. One of his goals was to replace steam engines by electric motors. So he started to publish in Annals of Electricity around 1838. Two years later, in 1840, he discovered Joule's law: the amount of heat generated by a conducting wire equals Q = R I² t. He hoped to impress the Royal Society but he was treated like other people from towns with breweries: as a provincial dilettante.

Joule studied the efficiency of various energy sources and possibilities how energy can be converted from one form to another. Outside the Academia and outside the engineering profession, he discovered the equivalence of heat and work and the first law of thermodynamics. Today, we use Joule as the unit of both heat and work. It is expressed as the product 1 J = 1 kg m²/s² and seems unspectacular but Joule's discovery was nevertheless one of the classic, ancient cases of unification.

You should realize that heat used to be viewed as an independent physical phenomenon whose relationship with other concepts in physics was unclear. Even today, many people look at heat in this way before they learn the correct explanation and some of them never do. Isaac Newton himself thought that heat was a form of liquid. It used to be measured in different units. One calorie was defined as the heat obtained by cooling 1 gram of water by 1 °C. Once Joule's discoveries are appreciated, we don't need to consider an unmotivated and ill-defined liquid such as water or temperature differences: heat can be expressed in the same universal units as mechanical work.

The fate of units

Every basic unit in physics can be viewed as a major mystery waiting for its discovery. Joule was able to express calories in ... Joules although his estimate was not terribly accurate: the first law of thermodynamics had to be discovered along the way. Kelvin degrees can be expressed in Joules, too. You need Boltzmann's constant to convert Joules to Kelvins but you will only understand this conversion as a natural one if you figure out that heat itself is energy stored in microscopic degrees of freedom of matter: statistical mechanics is needed.

There are other a priori independent units that can be converted in a similar way, requiring analogous discoveries. The electric and magnetic units may be expressed in grams, centimeters, and seconds, too: that's what CGS/Gauss's units do. In SI, you are left with seven basic units. Ampere may be re-expressed in kilograms, meters, and seconds. It was only reintroduced into SI to deal with different conventions where the speed of light should be put into Maxwell's equations in CGS units (CGSE/CGSM etc.).

Candela is a partly subjective quantity because it can only be defined if you realize what frequencies of light are visible by the human eye. In other words, you can eliminate candela from the list of basic units and replace it by the full function encoding power carried by light at different frequencies. Kelvin is re-expressed in Joules using statistical physics, as we have already mentioned. Mole is also eliminated once you learn what Avogadro's constant is: you may then count matter directly in atoms and molecules.

What is left is meter, kilogram, second. Meters can be converted to seconds as soon as you discover special relativity and realize how fundamental a role the speed of light plays in theoretical physics and how unnatural it is to have different units for distance and time. Inverse seconds that measure frequency can be expressed in Joules that measure energy, eliminating one more independent unit, if you are Max Planck and if you discover a basic fact about quantum theory, namely the energy carried by a quantum of radiation at a given frequency, E = ħω. These facts also allow you to say that (and why) the angular momentum (or the action) is a dimensionless quantity.

With relativity and quantum mechanics, you are left with one independent unit. Because you will have probably understood the basic framework of relativistic quantum field theory at this point, the independent unit will probably be chosen to be 1 GeV, because of cultural reasons linked to particle physics. But one independent unit is still one too many. In quantum gravity, you may set Newton's constant equal to one (or to 1/8π) and everything becomes dimensionless.

It may actually be better to put a different constant instead of Newton's constant equal to one because Newton's constant is a low-energy phenomenological coefficient and at very high energies, there might be more natural objects to fix your units. For example, if the strings in the real world were weakly coupled, alpha' could be an equally good or better quantity to be set equal to one.

Once all your quantities become dimensionless, you have the right framework to describe physics in terms of mathematics, eliminating all kinds of unexplained conventions and incomplete descriptions. But physics is not yet over because you must still explain the numerical value of many universal dimensionless quantities that appear in Nature.

The reason why I wrote these trivial things is that many people - e.g. those who work on the so-called Variable Speed of Light theories - misunderstand them. They think that progress in physics is obtained by introducing new coefficients, new units, and new time-dependence of universal constants. Well, it may be progress but it would be negative progress. The goal of science is to explain increasing collections of numbers observed in Nature by equations built upon a decreasing number of independent concepts, assumptions, and parameters.

Incidentally, the Czech children still learn that "Joule" should be pronounced as "džaul". This information is promoted by the experts who "know" English and who know it is not pronounced as "yoaleh" as most Czechs would expect. ;-) Only when I came to the U.S., I learned that it was pronounced as "džúl" outside Czechia.