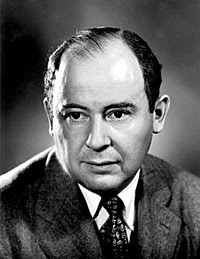 John von Neumann was born on 12/28/1903 as Margittai Neumann János Lajos to a rich Jewish family of a banking lawyer in Budapest. He was one of the greatest 20th century mathematicians.

János, nicknamed "Jancsi" (Johnny), was the oldest among three brothers and a child prodigy. He entered a German-speaking school at age of 8. Two years later, his father acquired "von" for his services to the Austrian-Hungarian monarchy. His son became János von Neumann, a name later changed to Johann von Neumann. Johann received his PhD in mathematics at age of 23, earning degrees from chemical engineering at the same time (because his father wanted him to be rich, too). By the time he was 25, he had published 10 major papers. Five years later, the figure jumped to 36.

His family moved to the U.S. in 1930. Johann changed his name to John and became one of the first four or five employees of the IAS, Princeton together with Einstein, Gödel, and one or two more. For his first wedding in 1930 to work, John converted to Catholicism and this religion stuck. In 1957, he was diagnosed with pancreatic cancer that quickly took over his body and killed him: it was probably a result of his work in Los Alamos discussed below.

Because this is also a global warming blog, let me start with a fact that is neither terribly important not too well-known. One of his hobbies was to forecast weather. As a result, he has also designed a sophisticated project that could have efficiently raised global temperatures and make the world a better place: it was an ambitious project of a man-made global warming. He wanted to spread colorants on the polar ice caps in order to reduce the albedo and increase the absorption. ;-)

John von Neumann also wanted to preemptively nuke the Soviet Union to prevent the damn communists from getting a nuclear bomb; later, when it was too late, he invented the mutually assured destruction doctrine. When you combine the previous two sentences, it is not hard to guess that he would recommend to nuke the IPCC, Al Gore, and similar dangerous crap today, too. In the U.S. Senate, he described his political ideology as "violently anti-communist, and much more militaristic than the norm". Well, I am on the same frequency. :-)

Von Neumann was a frequent consultant for Standard Oil, CIA, Pentagon, the Rand Corporation, IBM, and others. I am sure that the contemporary far-left nuts would love him! ;-)

At the end of the 19th century, mathematics was already based on meticulous axiomatics. Suddenly, Russel's paradox emerged. If you don't know, its essence is a "set M containing all sets X that are not elements of X i.e. themselves". Now ask, is M an element of M? If it is, it's not, and vice versa. To solve this paradox, it must be illegal to construct such a set M.

There are two basic strategies to get rid of the contradictions: the Zermelo-Frenkel approach that only allows you to construct "small enough" sets constructively or "from below" and the notion of "class" that allows you to construct classes (more general concept than a set) such as M but they are not guaranteed to be sets and only sets such as X may be included into classes. These approaches were known from the early 20th century and 20 years later, von Neumann essentially completed them.

However, the story was not over because in 1930, Kurt Gödel announced his incompleteness theorem. Incidentally, von Neumann was an important "ear" for Gödel, for example when Gödel was making his pioneering steps in P & NP completeness.

Von Neumann decided to write down axioms for quantum physics. Observables are linear operators, and so forth. His work has conceptually unified Heisenberg's matrix mechanics with Schrödinger's wave mechanics although Paul Dirac's realization of this task was more concrete and became more popular with the physicists.

He also knew that the probabilistic predictions of quantum mechanics couldn't have been an approximate reflection of a deterministic theory. So he "proved" the first hidden-variable no-go theorem. Its main conclusion was right but the demonstration included a conceptual error. He also proposed a new kind of logic for quantum mechanics that didn't respect commutativity of conjuction and other things.

Physicists including your humble correspondent always preferred to keep the normal logic. I really don't understand how one could work with von Neumann's strange rules. The consistent histories, the most complete framework to interpret quantum mechanics today, imply that exactly those quantum histories (sequences of projection operators at different times) for which the classical rules of logic work - the consistent histories themselves - are allowed. A new logic is unnecessary and, using the jargon of consistent histories, it is inconsistent. :-)

Von Neumann has introduced methods from mathematics and natural sciences - game theory and general equilibrium theory - to economics and found a strategy to minimize the maximum loss (the minimax theorem, something that has some links to von Neumann algebras). He has also incorporated imperfect information to the picture and invented backward reduction in game theory.

John von Neumann participated in the design - the optimal angles and altitude - of explosive lenses, a gadget needed to compress the plutonium core of the Trinity test and the Fat Man that was sent to Nagasaki.

He was a member of the committee that was choosing the targets. What was his first choice? Well, everyone who knows the dangerous attempts of some loons today to globally regulate carbon must guess what is the right answer. Yes, his first recommendation was Kyoto, a cultural center. Finally, however, they chose Hiroshima and Nagasaki.

Robert Oppenheimer remarked that the physicists in the Manhattan project "had known sin". Von Neumann's response was more constructive. He said that "sometimes someone confesses a sin in order to take credit for it". ;-) He continued unperturbed and filed a secret patent how to use a fission bomb to initiate a fusion bomb. It was not quite the ultimate Teller-Ulam design but it was in the ballpark.

During the hydrodynamic simulations for the Hydrogen bomb, he co-fathered the Monte Carlo method and invented the middle-square method to generate pseudorandom numbers. The hydrodynamics programs including his "artificial viscosity" later turned out to be very helpful for astrophysics.

At some moment, von Neumann outlined the von Neumann architecture: the same memory is used both for programs and data. It became standard. When we talk about a good architecture, you might also ask what were its lame competitors. Yes, it was primarily the crappy Harvard architecture ;-) where the two "memories" were separated.

John von Neumann is the father of the field of cellular automata. He advocated self-replicating automata for mining of an entire moon or asteroid belt ;-) and worked out a toy model for such automata on paper. As far as Al Gore Rhythms go, von Neumann invented the merge sort algorithm and was able to simulate a fair coin with a biased coin.

John von Neumann was a polymath, the kind of a genius who would not be tolerated by the mediocre scholars dominating the contemporary Academia.
Luboš Motl v 8:43 AM
Share