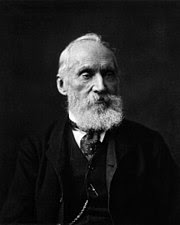 While his grandfather was a farmer, his father was an engineer who later became a professor of mathematics. At the age of 9, William survived serious heart problems. I would guess that this childhood experience may partially explain why Lord Kelvin became such as a tough and even severe figure as an adult.

As a student, he won a prize for an essay about astronomy. However, he focused on continental mathematics very soon afterwards. Recall that Britain was working in the shadow of Isaac Newton whose approach to mathematics was heuristic or phenomenological, if you wish. On the other hand, continental Europe had been excited about rigor for quite some time.

Thomson encouraged Faraday to make a discovery and the Faraday effect is partially a result of Thomson's moral support. But Thomson's key early contributions occurred in thermodynamics.

At the age of 23, he was already viewed as a mature yet maverick scientist. At an Oxford conference in 1847, Joule tried to debunk the old "caloric" theory of heat that assumed that the heat was a fluid. Thomson was skeptical but started a serious research. He declared himself to be a member of the French clique of Carnot and Clapeyron and analyzed what the non-existence of a perpetuum mobile meant for the dependence of various quantities such as the melting point of ice on the external parameters such as temperature.


In 1848, Thomson finally proposed the existence of absolute zero and defined an absolute temperature, currently measured in Kelvin degrees.

It took one more year or so before Thomson understood why the caloric theory was wrong, Joule's equivalence of heat and work was correct. He made some basic steps towards the second law of thermodynamics. The language of thermodynamics was a bit religious at that time: heat was work that was "lost to man irrevocably; but not lost in the material world". A compensation would require a "creative act".

In the 1850s, he started to build the first transatlantic internet cables. They were referred to as telegraph cables. By having argued about the most economical design of the cable in the media, he became a publicly known figure. He joined the board of directors of the Atlantic Telegraph Company but was largely ignored - including his project that could send more than 1 bit of information per second ;-) - until he started to claim that copper was a superior choice for the cable. At that moment, he became important. In 1858, he participated in the cable installation, already as a manually skillful guy.

The mainstream design of the cable system due to Wildman Whitehouse, the real boss, collapsed and had to be replaced by Thomson's galvanometer. Thomson had some respect for Whitehouse but later he was sorry that he didn't attack Whitehouse's proposals more intensely. Whitehouse was fired and Kelvin became the new boss. His cable-laying expeditions of 1865 and 1866 were ultimately successful and Thomson was knighted in 1866.

After a long illness, his wife died in 1870. He bought a schooner, a sailing vessel to entertain his friends and colleagues. He married again in 1874, using telegraphic signals to agree about the wedding with Fanny Blandy who was 13 years younger. Thomson was also an enthusiastic yachtsman. He contributed a lot fo the technology of compasses, ancient global positioning systems on the sea, promotion of the Morse code, and other things.

But it may be equally important that between 1855 and 1867, he co-authored the Treatise on Natural Philosophy with Peter Guthrie Tait, a thousands-of-pages-long two-volume textbook that defines classical physics as we know it or, more precisely, as the contemporary engineers know it.

Back in the 1840s, he started to settle the operational methods to measure electric units, especially with the current balance (Ampere balance or Kelvin balance) that defined 1 Ampere.

In 1893, Thomson was the leader of an international committee that designed the Niagara Falls power station. Even though Kelvin was a fan of direct current, Nikola Tesla convinced him about the advantages of three-phase alternating current power transmission. Thomson surrendered and in 1896, he described Tesla as the greatest contributor to electrical science ever. Have you taken a picture of yourself with Tesla's sculpture near the Niagara Falls?

Throughout his life, Kelvin was a devout Christian who attended church on a daily basis. It may have influenced some of his opinions. For example, he believed that the Earth had to be a few dozens of millions of years old. Charles Darwin and some geologists already knew that the age should be counted in billions of years. Frankly speaking, I don't think that Kelvin's error was a result of the religious influence. Millions of years were incompatible with the Bible just like billions of years. Kelvin just made some wrong calculations here and there and underestimated the uncertainty about various quantities such as the useful energy stored in the Sun.

In 1884, he gave cute lectures at John Hopkins University about mechanical models of the aether. These lectures were creative but their lasting value for physics is zero. The mechanical model of the world collapsed pretty soon and the aether was moved to the dumping ground of the history of physics.

However, I would say that Lord Kelvin was perfectly aware of the real defects of the image of the world as painted by classical physics. In his famous talk in 1900, he described two clouds floating about physics of his time. Physics, he argued, couldn't explain two phenomena: the Michelson-Morley experiment and the black body radiation. These two clouds led to relativity and quantum mechanics, respectively: two major revolutions in the 20th century that would start one year later.

Kelvin has made some wrong predictions about engineering and marketing. In 1895, he said that flying machines that are heavier than air were impossible. It only took 8 years to prove him spectacularly wrong. In 1897, he said that radio had no future which would be rather accurate except for the 1920s-1960s when radio was very popular. OK, it is still popular with some people under certain circumstances but today many of us might agree with Lord Kelvin's statement that radio has no future once again. ;-)

Kelvin belongs to a different era, a pre-quantum, pre-relativistic epoch. Still, we may recognize that he was simply an important guy in an industrial society similar to ours.
Luboš Motl v 7:14 AM
Share