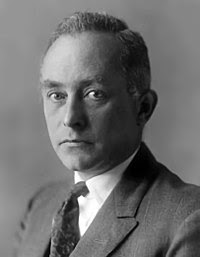 On December 11th, 1882, two well-known people were born: Fiorello LaGuardia and Max Born. LaGuardia, nicknamed the Little Flower (a translation of his first name combined with his being a kind of dwarf), was a mayor of the New York City, nicknamed the Big Apple (several explanations of the nickname exist). He was a popular GOP supporter of the New Deal and an early critic of the Nazis and an airport was ultimately named after him. He lived in the Big Time when the Little Flower was a Big Cheese in the Big Apple. :-) See a video.

But because my nerd score was just measured to be 96 (click to get yours), we will obviously spend more time with Max Born.

Max Born was born in Silesia, Greater Germany, to a Jewish family. His father was a biologist while his mother was a daughter from an industrialist family who unfortunately died when little Max was four. He spent some time in Breslau, Heidelberg University, and the University of Zurich. But he came in touch with many great minds in Göttingen, including Felix Klein, David Hilbert, Hermann Minkowski, Carle Runge, Karl Schwarzschild, and Woldemar Voigt (please don't forget the "g"). His ties with Minkowski and Hilbert were very close. Hilbert decided that Max Born was an exceptional guy so Max received the honor to write up the class notes. ;-)

Max Born was able to defend a PhD on elasticity - a favorite subject of Klein - despite some elastic relationships between Klein and Born.

Even though Born's wife was Jewish as well, he converted to the Lutheran Christian belief. The prettiest and most famous granddaughter of Max Born was Olivia Newton-John, a prominent British-born Australian California-based pop singer, drummer, actress, high-school dropout, moral warrior against breast cancer, and ecoactivist. She's been depressed since 2005 when her partner Patrick McDermott went missing during a boat trip. While Olivia's mother was Irene Born, a daughter of Max Born, her father was Prof Brinley Newton-John who wasn't related to Isaac Newton but who took Rudolf Hess into custody when he parachuted into Scotland in 1941. ;-)

"Physical", the aerobic anthem and the most popular song by physicist Max Born's granddaughter (1981). As a kid, I liked the song especially because I could understand one word - it was about "fyzika" (physics). :-) Compare with Kylie Minogue's remake (2000). Unfortunately, both Newton-John and Minogue know what it means to have breast cancer. You may have heard of "Grease" (1978) and "Xanadu" (1980), too. Only the Xanadu song, not the movie, was successful. I was thinking whom her hot energy reminded me of and I think I got the answer: Obama Girl.

Incidentally, Ms Libuše Barková, an enterpreneur, a boss of a brothel, and a friend of former Czech prime minister Gross, became the only international producer of "Grease" (the Czech version is called "Pomáda") who hasn't invited Newton-John.


Between 1915 and 1919, while at the University of Berlin, he became a life-long friend with Albert Einstein. Once Born became a boss at Göttingen, he figured out that Arnold Sommerfeld of the University of Munich shared his experiment-based approach to theories. Equally importantly, Arnold Sommerfeld sent Max Born a pretty good student to become Born's assistant. His name was Werner Heisenberg. ;-)

Max Born was kind of leading his junior colleagues such as Werner Heisenberg and Pascual Jordan in their research of matrix mechanics. Heisenberg was 60 days faster than the other two but before the year ended, these three men published a paper together.

In 1928, a former patent clerk called Albert Einstein nominated Heisenberg, Born, and Jordan for the physics Nobel prize. However, it didn't work that way. Heisenberg had to wait until 1933 when the 1932 Nobel prize was finally announced and he received the whole amount even though he insisted that Born and Jordan had deserved to share it. Max Born waited until 1954 when he received the full prize for the statistical interpretation of quantum mechanics.

Pascual Jordan never received a Nobel prize, largely because he became a Nazi party member and a storm trooper in 1933. It was the same year when Max Born - a Jew and a pacifist combined - left Germany for Britain.

Although Max Born has written a lot of things about physics, we associate him with the probabilistic interpretation of quantum mechanics. The function "psi(x)" is not a classical wave analogous to the electromagnetic field or a diluted electron as Schrödinger and others used to think. Instead, it is a gadget whose only role is to predict probabilities that a particular outcome will be observed. For example, "psi*(x)psi(x)dV" is the probability that a particle is gonna be observed in a small volume "dV" near the point "x".

This insight due to Born may seem to be a very modest one but it is one of the main symbols and results of the quantum revolution, the most profound conceptual breakthrough in the 20th century science. It is very likely that Max Born was able to articulate this principle so crisply because his thinking about physics was rooted in experiments. By thinking about the actual experiments, he could easily and efficiently falsify various "materialist" interpretations by his less empirical and more philosophically prejudiced colleagues.
Luboš Motl v 7:25 AM
Share