The highest temperature today in Pilsen was -3 °C and there are some small snow residuals around.

But in Ontario, Quebec, the U.S. Northeast, and, to some extent, the U.S. Midwest, they have more fun. At some places, they received a foot of snow which is not bad even though it is less than forecast. But Southern Ontario still has a chance to see a record snowstorm.

In Boston, the one-foot snowstorm has set a new record for December and exceeded the average amount of snow for the whole December. 400 flights were canceled at Logan. 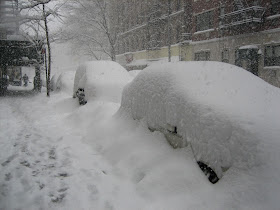 Reports about the snowstorm:

By the way, the global sea ice area anomaly is slightly positive right now (graph, more): it means that the total area is higher than the average for mid December. I am afraid that you won't read about it in the media.