Sorry for the break. Yesterday I played a high school teacher of English in 3 classes - it was fun - and today we attended a neat picnic full of VIPs in Prague.


The folks above were sorted according to a poll.

Who could be the winner? The Huffington Post, a far left-wing blog, wrote:

Given former U.S. Vice-President Al Gore's massive passion and visibility advocating environmental causes, it is virtually impossible to see anyone else getting the nod. From carbon footprints to going to Bali, to winning the Nobel Peace Prize, who else?

With a breathtaking combination of arrogance and ignorance, the loon on that blog keeps on explaining that Al Gore is effectively God and that the only competitor could perhaps be Barack Obama. But Russell Shaw is surprisingly able to figure out that Barack Obama couldn't have really been included even in the top eight because he hasn't achieved anything substantial in his life so far. He hasn't even won any primaries so far. 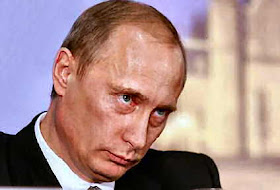 Well, the world fortunately doesn't quite follow predetermined plans of far-left ideologues although they would undoubtedly prefer a world that does follow their desires. The Time magazine has decided that

is the guy whose cool eyes say "I am in charge" and he must become the person of the year. The portrait of Putin is pretty interesting to read. At any rate, Putin is indeed a powerful figure who is certainly very good in calm calculations related to power and strategy. He is an old-fashioned leader who may have learned from Machiavelli.


His position in Russia is arguably compatible with democracy but it is not far from its boundary either. And the position of Russia may have increased in 2007. The Big Bear also knows how to benefit from many international mechanisms including the attempts to regulate carbon.

Human Events, a right-wing blog, writes something that looks like a hoax to me but in this crazy world, I can imagine that it is true, too. They write that Al Gore has sued the Time magazine because they haven't chosen him! ;-) Do you think that the Human Events article is serious? Al Gore is certainly one of the most arrogant failed politicians in the world but is he *that* arrogant? I just find it hard to believe.

The "accusations" in the hypothetical "lawsuit" sound completely ludicrous. Whether the people in control of the Time magazine denied the right to vote to some nutcases in their team who would vote for Gore is clearly up to them: it is their award, after all. They create the rules. I would not only deny the right to vote to the people who would support someone like Gore but I would send them to a psychiatric hospital, too.

What the hell is illegal for a magazine to eliminate a fashionable jerk from the possible winners of its award? I don't believe that there exist laws that would force bosses of a magazine to give dumb employees the equal right to vote in an award they own and define. Can you imagine that someone would sue the Nobel prize committee because of alleged things that happened before they announced the winner?

There exist similar articles, e.g. about Al Gore requiring a recount, that I believe are jokes. But with the Human Events, I am not 100% sure although the answer "it is a hoax" sounds more likely.
Luboš Motl v 9:07 PM
Share